Where did the Volvo 700 series come from? Let’s go back…. to the 1970s. Volvo, a leader in its class for reliable, safe and wallet-friendly family vehicles, was looking forward to a profitable and successful decade. In 1974, however, the oil crisis turned the auto industry upside down, disrupting sales and causing many companies to […] 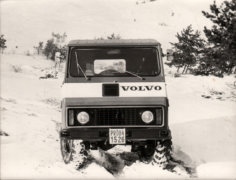 The Volvo Laplander was a military vehicle built by Volvo in the 1960s and 1970s, and used by a variety of countries’ militaries. Ownership and use of these trucks eventually trickled down to civilians, and now private owners use, show and maintain Laplanders worldwide. In the early 1950s Volvo received an order to develop a new utility […]

Don’t miss History of the Volvo 5-Cylinder Engine, Part 1. The inline 5 (I5) cylinder engine has come to be a symbol of Volvo’s recent past. But did you know that manufacturers started whipping up first iterations of this quirky engine as early as the 1930s? While in the US we gave up on the […]

Volvo’s history is intrinsically intertwined with the Volvo 5 cylinder engine. More than any other auto maker (besides maybe Audi), Volvo’s name has become almost synonymous with this rather idiosyncratic engine over the last 30 years. At the time, it was a perfect compromise between the 6-cylinder’s power and the 4-cylinders size and efficiency. Of […]

Let’s talk about Volvo’s Recent Past Volvo is one of the most iconic and best-known Swedish brands. Although a relatively small company, assembling fewer than 500,000 cars per year in recent times, it is arguably one of the best-known automotive companies world-wide. Its widespread recognition derives from its reputation for leading-edge safety technology and environmental […]