precopster » Ok so I decided it would be best to source another engine from a pick and pull. I found a near new 20 valve engine with 195-205 psi on all cylinders.

It was fitted to a ’95 850 GLT (NA) with around 76K miles that had been made it to the graveyard. Honestly the only thing I could say that was a annoying fault on this car was that the door stay bracket on the frame had ripped away and was making the trademark clicking noise (a problem I repaired on my 850 wagon by removing the door and tapping in some bolts where the factory welds had snapped)

Oh and it had a small scrape on the boot and a broken tailight. Two day’s work for any carlover.
It had great wheels and new Firestone 205/55 16″ tyres, new discs all round and new pads, a great leather electric driver’s seat, all of which have found their way into my ’99 V70. All this including the engine & transmission for $950. Mind you it took me 1.5 days in searing heat to remove the engine/transmission assembly. What can I say, I’m a lucky man.

Well the accessory bracket from the ’99 bolts right up with 5 of the 7 bolts are being used (the blocks were upgraded with 7 bolts from ’99 on) I don’t see it being a problem as the 850 only used 5 bolts and carried the same weight. I suspect the penalty will be increased vibration as the different design accessory bracket may require a greater number of bolts to avoid resonant frequencies. Perhaps this is how Volvo helped the later engines to be slightly smoother. Also the casting on the exhaust side of the block looks different with 2 large flat areas on the later motor.

The water pipe at the rear of the block is a different shape (or you can keep the old one and just run 850 lower radiator hose) It just pulls out; there is an O ring seal there but I kept the old o ring, hope I don’t regret it.

The sump on the V70 has a inbuilt thread to carry a fuel line holder and the V70 sump bolts straight on to the 850 block. Another of the fuel line holders was behind the accessory bracket on the V70 motor but the 850 has no tapped thread there.

A helicoil to take a 8mm thread will have to be tapped in to the 850 block to accomodate the mechanical tensioner.

The hose from the block to the PCV box will need to be taken from the V70 and of course the ’99 V70 PCV box itself is different.

The V70 only has one knock sensor in a more centralised position. (850s have 2)

The pistons in the ’99 V70 share the same physical size as the 850s but the 2nd compression and oil ring are lower; no big deal.

The crank pulley has 21 teeth on both engines.

I’ll post more pics as I re-assemble her. The head has to go in to a machine shop for a straightening and skim. 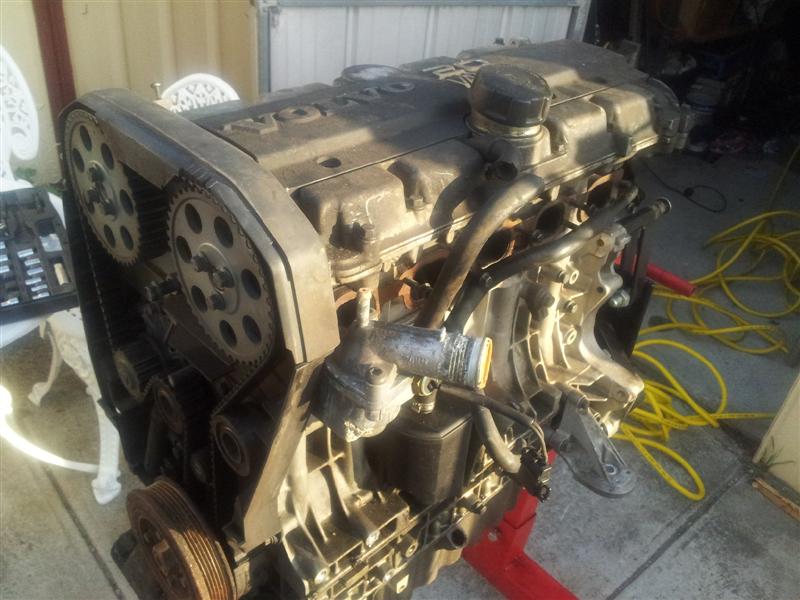 The original near perfect engine