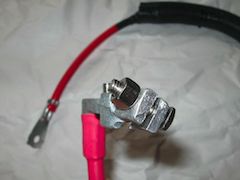 The new cable came from IPD on Friday and I installed it today. The part does fit the 850 just as you guys (Bob850, erikv11) said it would. Thanks! I had to bend the ears on the cable terminal just like what you described. I suspect from the yellow ID label on the bag that it was made by Ramac (“RAMAC4520” just below the bar code on the label), just like the one offered by FCPeuro ( http://www.fcpeuro.com/products/volvo-b … 70-9456836 ). Cable in bag as delivered from IPD Bolt is at an angle to make access easier during tightening.

I took a few pictures along the way during installation to show what it looks like.
Be sure to disconnect the battery cables (positive first, then negative) — be sure you have the code for the radio before disconnecting! I removed the battery from the car to make it easier to route the new cable.
Here is the starter with the original cable still in place, after removing the black plastic cover. The starter cable (on my 855 at least) was the spade terminal closest to the starter on the attachment bolt. I loosened the bolt with a 1/4″ drive ratchet and a 13mm socket. There is not much space to access the bolt but it can be done. Loosening the bolt on the starter. A 1/4″ drive ratchet with a 6pt 13mm socket worked well for me.

Once you get the bolt loose you can pull all three terminals off and move the battery cable out of the way. I opted not to cut it off but instead I covered it with large diameter (~1″ dia) heat shrink tubing. I moved the old cable to the left of the picture below. On the right, I used a tie-wrap to tie the new starter cable to the wiring harness. The new cable can be fished in along the old wiring harness, in front of the fan and then up to the battery tray area. I snapped the cover back onto the starter after this:

B+ battery cable: does the ipd aftermarket part fit?