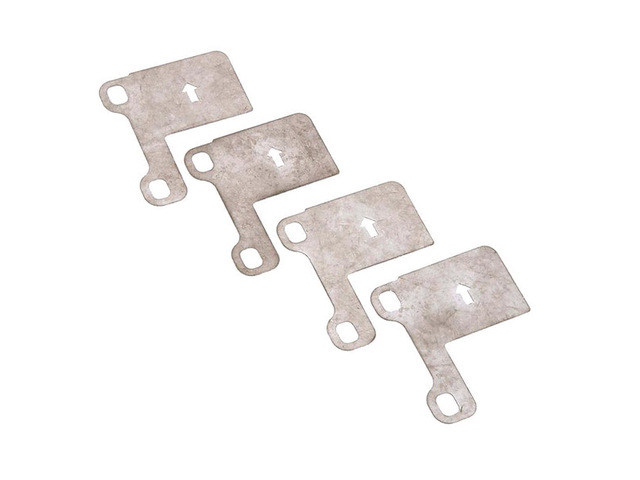 I recently replaced my rear wheel bearing and noticed that I needed to replace my rear pads as well. These were original pads that had minimal life left after 100k miles.

It went well, no surprises, for a simple maintenance procedure that rates a 3 on my 10-point skill level of difficulty (9 and 10 being an engine or transmission overhaul – call the expert). The bearing replacement was successful and I had new rear brakes. Then after about 100 miles the rear brakes started to squeal. Not just a light squeal, but the annoying, hey-look-at-me-I-have-something-wrong type of squeal.

After a web search on rear brake squeal I learned that there are Anti-squeal brake shims that Volvo came out with on a TSB. Also, a plethora of opinions on OEM vs. aftermarket brake parts and grease (I won’t go there). I couldn’t find anything other than a picture of the improved shim. Here are the steps for replacing the shims – very similar to a rear brake job.

If I were doing a brake job, instead of replacing just the shim, I would also bleed the brakes and try to purge all of the old brake fluid to replace with new fluid. The emergency brake drum worked fine and did not need any adjustment so I did not mess with it when I replace the wheel bearing or the shim replacement two weeks later.

I like your information my mechanic can’t look at my car until next week. Anyway I listen to the radio so I can’t say if this sound I hear is new? Its comeinf from the rear its a high pitched sound thats their even when I’m coasting when I hit the breaks I don’t hear it when I turn my wheel to thelet I don’t hear it? I had my front breaks done huge break job last year and my rear was still OK? So I waited I’m thinking break problem? Not sure any advice need to use car to go to work.