Getting to the Speakers 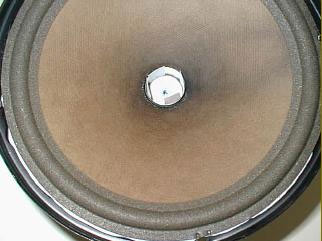 To get at the speakers you must first fold down the rear seat, and remove the 2 bolsters on either side of the rear seat attached to the metalwork above the rear wheel well. Remove the bolsters by pulling out at the top towards the front of the car, and then up once it comes away. It does take a bit of pulling power to remove them but the frame of the bolster is pretty strong. Next you have to remove the rear shelf to which is attached the speakers. I found this pretty difficult because I didn’t know how it was attached.

Removing the Speakers for Repair

Reading my Haynes manual told me that I needed to use a screwdriver to prise up the shelf from the 2 clips. Note I did not need to undo the centre seat belt bolt as I did not need to fully remove the shelf from the car but turned it over to work on it with the seat belts still left in place. With the shelf out of the way you can then remove the 2 screws holding each speaker in position, unclip the cable connectors and lift up and out the speakers. I did not use the radio whilst the 2 speakers were out of the car as a precaution against possible damage to the amplifier in the radio.

Above photos shows one of the 2 speakers before removal of the tweeter support, tweeter and cones. Cut the glue from around where the tweeter is held into the support and gently prize up the tweeter from the support using a small screwdriver. Remove the torx screw from the edge and the torx screw which you will find at the bottom of the central support on removing the tweeter. Prior to all this of course you will have to unsolder the connections to the voice coil and tweeter at the edge of the speaker shown in the bottom right of the picture below. 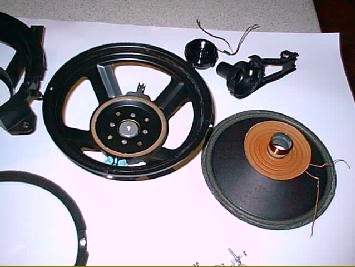 Having removed the tweeter and the plastic support piece the next step is to remove the remaining 3 torx screws holding the circular plastic piece to which is glued the mounting foam (shown in the bottom left of the picture above). The 3 remaining torx screws are hidden under the mounting foam at 90 degree intervals around the circumference, just push aside the foam to get to them. The plastic components of the speaker now just come free leaving the speaker proper to work on. The next step is to remove the cone.

I used one of those narrow bladed retractable knives and inserting it between edge of the cone and the frame of the speaker carefully (without cutting the foam edge of the cone) run it under the edge of the foam where it is glued to the frame and lift it away from the frame. You can’t lift it too far though as the ‘spider’ needs to be cut away now. The spider is the orange coloured corrugated support for the cone at the voice coil end of the cone, shown in the picture above. Carefully run the point of the sharp knife around the base of the spider where it is joined to the frame and thus cut it away from the frame. 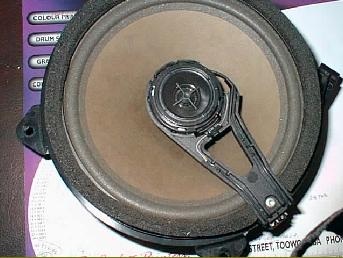 You can see the remains of the spider still attached to the frame in the picture above. Leave what is left there as you will be re-gluing the spider to what is left still attached to the frame. Gently free up the flexible wires from the plastic piece holding them, this will then allow the cone to be carefully lifted up from the frame. Use your fingers positioned at the voice coil end of the cone to make sure the cone is not distorted when lifting away from the frame. It may not come away so easily, depending on how much grit is stuck between the pole faces and the coil. When you have the cone removed, clean out the grit using a wooden matchstick and blowing hard. Also when you have made sure no more grit exists between the pole faces, clean off the glue from the frame where the foam surround of the cone was attached. You may need to take very fine sandpaper to the inside of the coil to make sure it is smooth again, being very careful as the former of the coil is made from thin aluminium. You might also like to check using a multimeter that the coil is still O.K. & that none of the turns of the coil has been cut by the grit. It is possible to buy new coils to fit to the existing cone, I do know of one supplier based in Melbourne that sells them.

When you are satisfied that all is clean, put the cone back into the frame and gently push down on the cone near the coil to see that the coil does not foul the poles and moves freely. If all is well, next step is to glue the cone back into the frame. Selecting the correct glue to use is important as you don’t want to use a contact type of adhesive as you may need to reposition the cone slightly so that there is no contact between the coil and pole pieces. I searched the shelves in the local hardware store for some time before I found one that was reasonably ‘runny’ but would set like contact adhesive after ~ 1 hour. Run a bead of glue around the perimeter of the frame where the flat part of the foam surround sits ( you can see the white glue in the picture at left) and position the cone centrally. I used pieces of normal bond paper as ‘shims’ and left them in place until the glue dried to make sure the coil was centered.

A small bead of glue has been run around the perimeter of the spider where it rests against the frame. Any irregularities in the cut you made to remove the cone should match up with the spider if you have replaced the cone in exactly the same position. In fact this is a good check that you have put the cone in the same position as it was when you removed it. Leave the speaker to allow the glue to fully set for a day or two before continuing on. You can check after a day or two that the cone moves cleanly between the pole pieces by gently pushing down with your fingers. You should be able to move the cone/coil into the pole pieces by as much as 5mm without hearing any rubbing or ‘farting’ noise. Satisfied all is well, you can now reassemble the rest of the speaker/frame assembly. Leave some ‘slack’ in the flexible wires that connect to the voice coil when you wind the wires back around the plastic holder shown in blue in the photo to the left. Don’t forget to push these wires through the plastic pieces before screwing them together so that they are in position for soldering to the terminals.

Putting it Back Together

Next is to replace the tweeter support and tweeter which is the reverse of disassembly. The tweeter pushes into its holder easily if you have cleaned out what was left of the original glue. I actually didn’t add any glue to this assembly as the tweeter was a snug fit and in fact I forgot to glue it. If I can hear any mechanical vibrations of the tweeter on deep bass notes I will remove the rear parcel shelf again and run some glue into the places where the original glue was. I was pretty keen to try out the speakers and now they are back in position in the car and sounding great, I am reluctant to go to the hassle of removing the rear parcel shelf again as I found it not an easy job to remove.

I thought long and hard as to how I was going to prevent sand/grit from finding its way into the speakers again, as I didn’t want to do this repair more than once!

Finally I used some very ‘sheer’ fabric to ‘filter’ out the music from the grit. The photo at left [photo unavailable for retrieval] shows the underside of the speaker grill covered in ‘dots’ of glue and the fabric cut roughly in the same shape as the grille cutout. The cut fabric is placed into position over the underside of the grille and is held into position by the glue. Any grit falling through the slots in the grille from the top side is trapped by the fabric and held there. Regular vacuuming when you clean the rest of the car will then get rid of it. I would imaging that a quick pass over the grille with a brush attachment on the end of the vacuum cleaner hose would suck it up easily. The fabric I used is a synthetic type of material very thin and with an open weave such that you can see through it like a very fine mesh. I’m hoping that the holes are too small to let grit fall through but not affecting the music too much if anything.

This was salvaged from the Wayback Machine. Article and photos copyright and courtesy philgower@rappsystems.com.au.