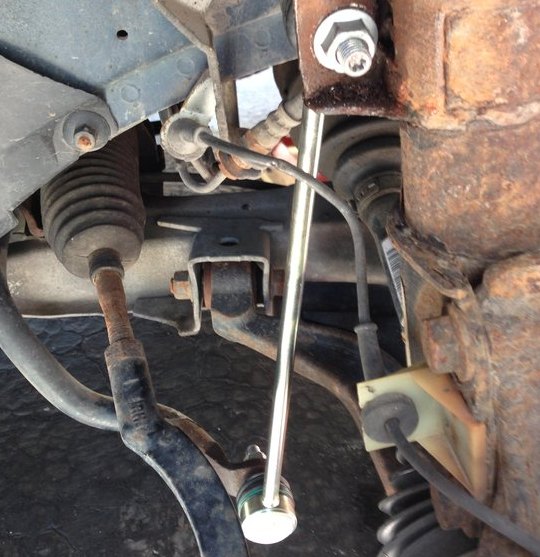 MVS Forums moderator Abscate tells what led him to know it was the sway bar end links: “…creaking, groaning, crack on loading the front end. I would occasionally get a crack so loud that heads would turn.”

So what’d he do? He got to work! His documented repair here is a compliment to the other couple end link repairs in the VRD, and his photos and steps are clear & clean.

The first generation V70 was an improved development on the basis of the Volvo 850 estate. Its overall design became more rounded doing away with the 850’s square edges. Among the many changes were a completely revised front end, fully painted bumpers and side trim and clear indicator lenses all around. Most of the interior was redesigned, with new seats, door panels and dashboard. According to Volvo a total of 1800 changes were made. Standard equipment was improved significantly with remote central locking, heated and electrically adjustable mirrors, two front- and two side airbags, power brakes with ABS and power windows being standard on every car. Trim levels varied for each market as did equipment levels of the most basic trims. In the United States, the badging denoted the engine variant, and to some extent the equipment level, whereas in Europe engines and options could be chosen individually. In all markets more powerful versions received better or upgraded standard equipment. The T5 and R were the series high-performance models.

For model year 2000 a new 5-speed automatic transmission with adaptive shift logic was introduced. It was only available on non-turbo, front-wheel drive models and the 2000 V70 R AWD. The naturally aspirated 10V engine was replaced by a detuned 20V variant. Drive-by-wire throttle was introduced for all non-turbo petrol engines. The 2.0L V70 XC was discontinued.