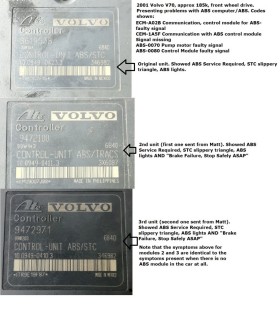 “two brake lines in from M Cyl., 4 lines out to wheels. Keep up with removed lines as they go back where they came from. The pump assy. is on a bracket and access is not great but not the worst either. Hose from air cleaner to turbo will need to be removed. The battery will have to be disconnected and the electrical box underhood on driver side has two bolts. One is under rear of air cleaner on inner fender and the other is hidden under the cables that meet in rear of that box on the stud that is part of box. Remove the two cables and the bolt is down in hole next to stud. Box slides towards the engine and comes out. Use WD-40 liberally on the connector and then it should come off (i guess you already passed that point…)”

I just purchased a 2002 v70 2.4t that has the ABS warning in my information center and the ABS light on the right on permanently. What do I need to purchase for an 02 model? They are different than the earlier models correct? Thanks Joe in Ga

Hi, can you tell me if the 8619538 CEM module be repaired. i open mines up and checked it even with a magnifying glass and did see any cracks. When to the dealer today, drove over 165 miles to let the them check but they assured me it was the ABS module causing the ABS liight to be om. Now I have two troubles the flywheel is out. I am in need of a fly wheel and module. I have a 2000 volvo nonturbo S80 with 2.9 litre. If you can help me, I will appreciate it.