This Volvo service bulletin explains how to fix an angle gear leak on 5 cylinder AWD Volvo model years 2001 to 2006.  Don’t replace it when you can fix it.

Note! This TNN supersedes the previous TNN 46-13 dated 2-11-2008. Additional seals and labor operation code have been added to the repair and chassis ranges have been updated.

Oil leakage/moisture from the angle gear halves can be resolved by resealing the housing and replacing the seals. The angle gear itself does not normally need to be replaced.

There are two reasons an angle gear should not be resealed and instead should be replaced:

1.) There is angle gear noise/binding while driving. 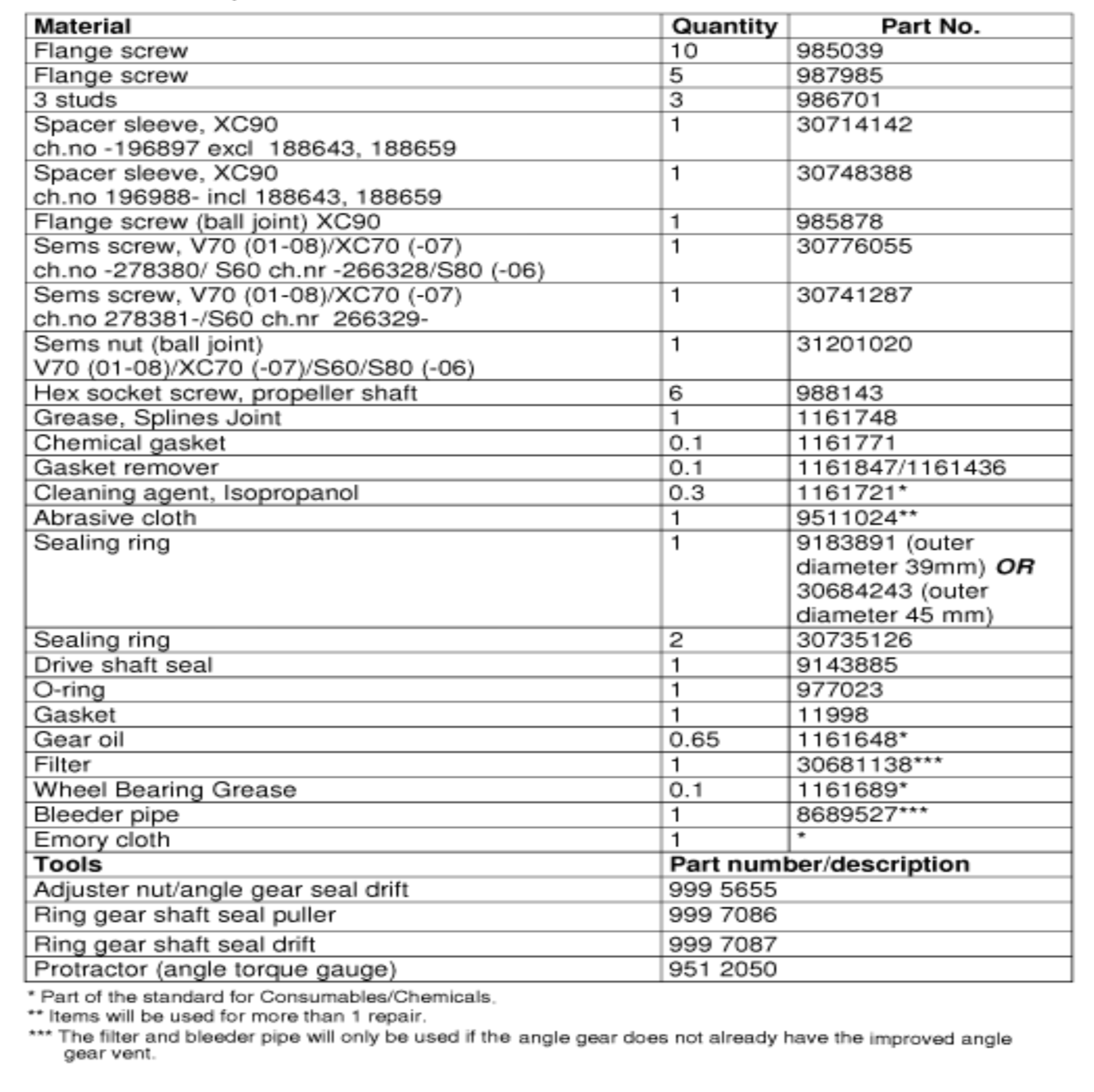 1. Remove the angle gear according to VIDA.

2. Drain the oil from the angle gear. 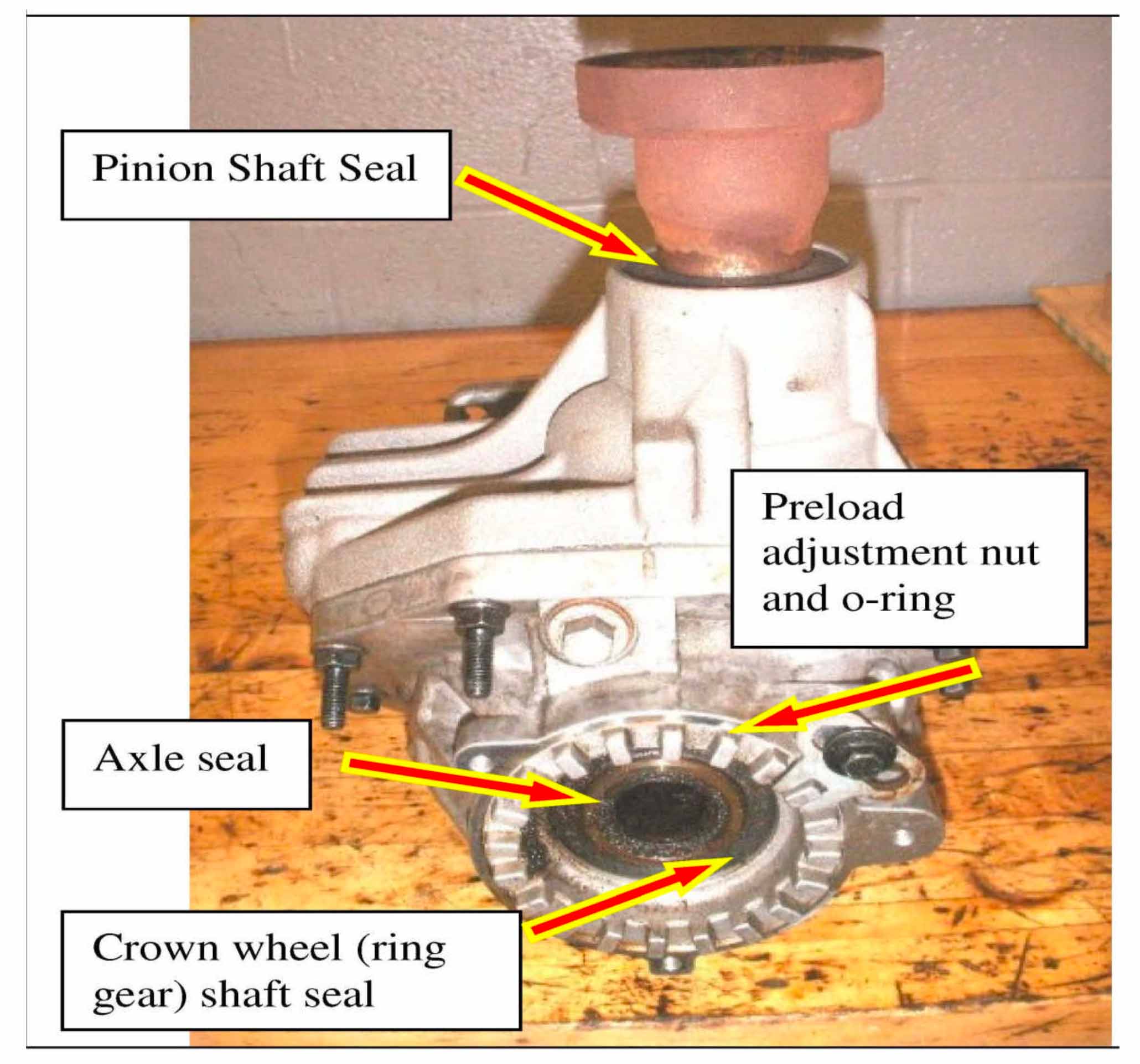 Remove the pinion shaft seal according to VIDA under Pinion seal bevel gear, replacing. Note! The ring gear will be referred to as a crown wheel in this document. 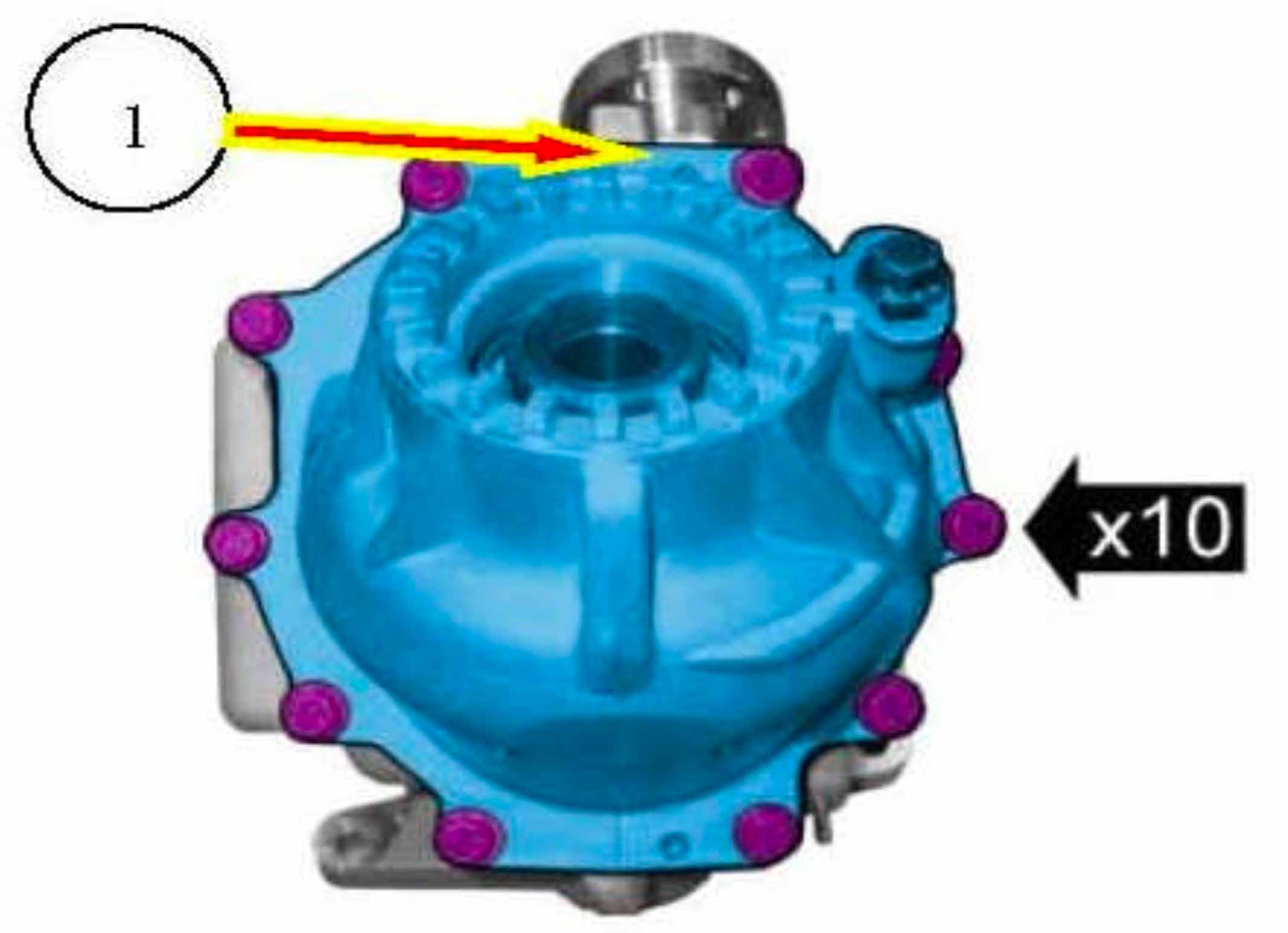 Remove the 10 screws and the cover. Carefully tap the cover using a plastic hammer to release it. 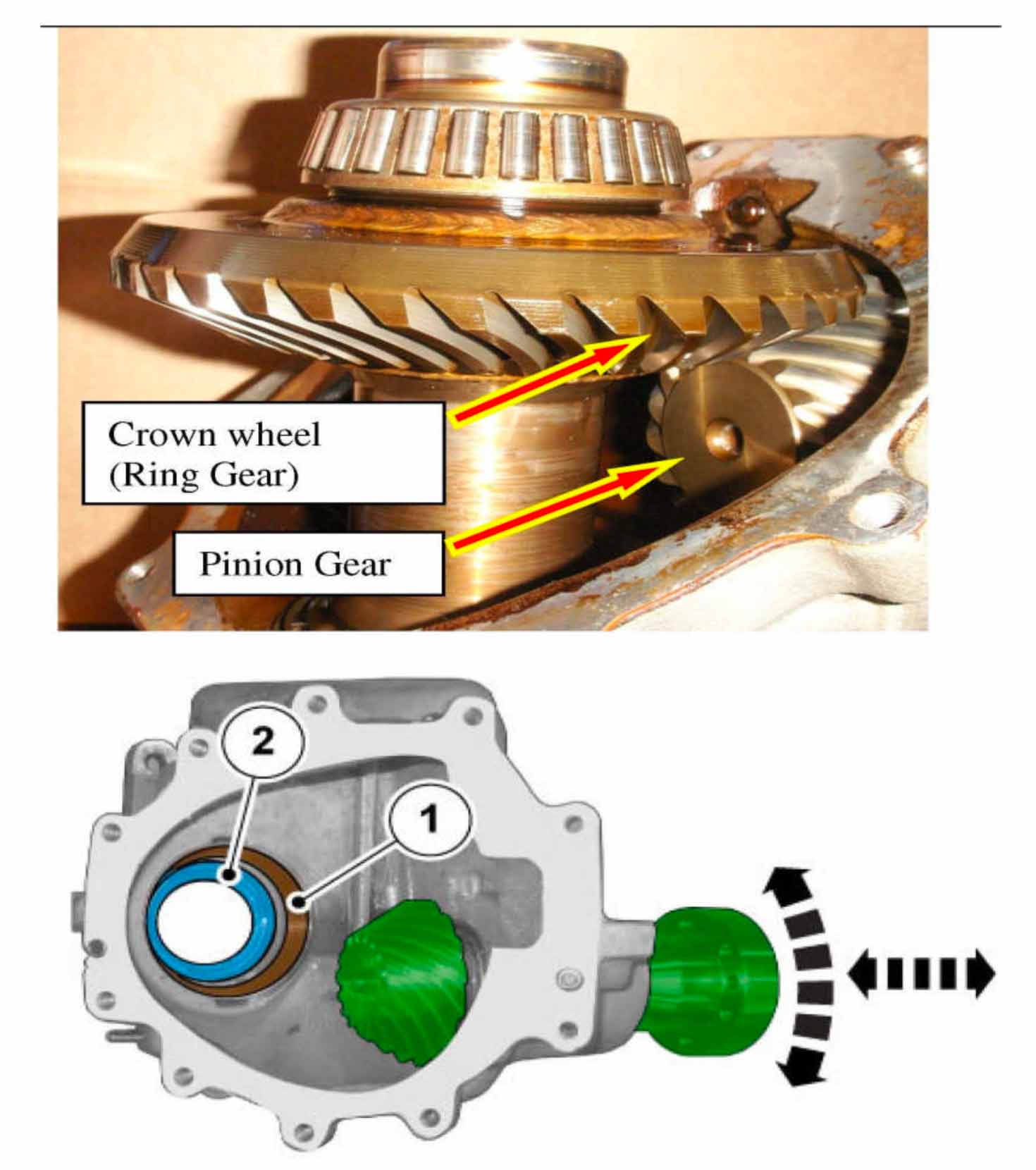 Check the pinion gear and crown wheel teeth for abnormal wear or damage. Check pinion shaft for axial play or any kind of binding. Check the bearing races (1) in both halves of the angle gear.

If a bearing race is damaged the pinion shaft has play, there is abnormal gear wear, or if there is any kind of binding, replace the angle gear.

If OK, remove the left side crown wheel shaft seal (2) according to VIDA under sealing ring, crown wheel shaft, left-hand side, replace and continue with the Step 6 of the resealing method. 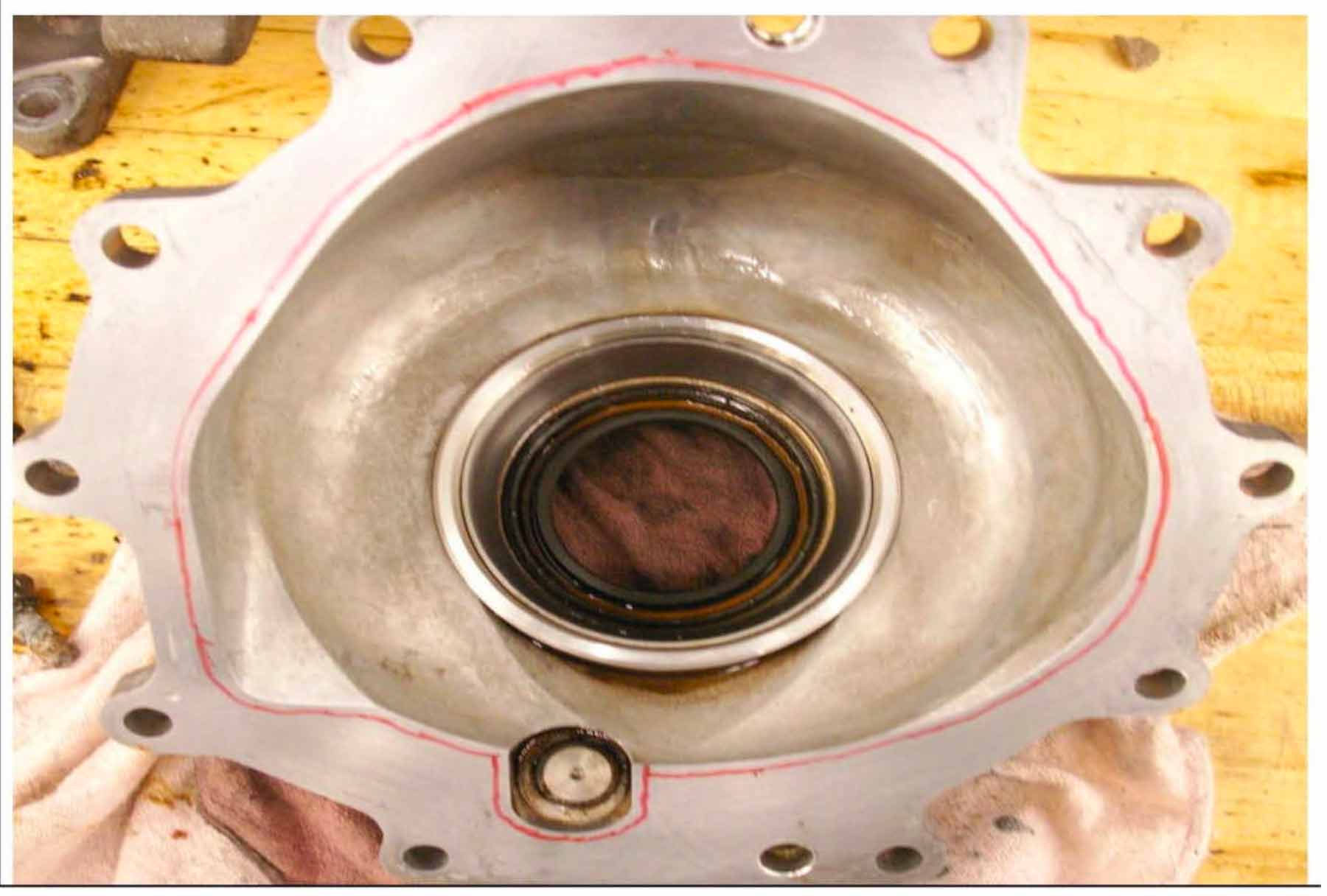 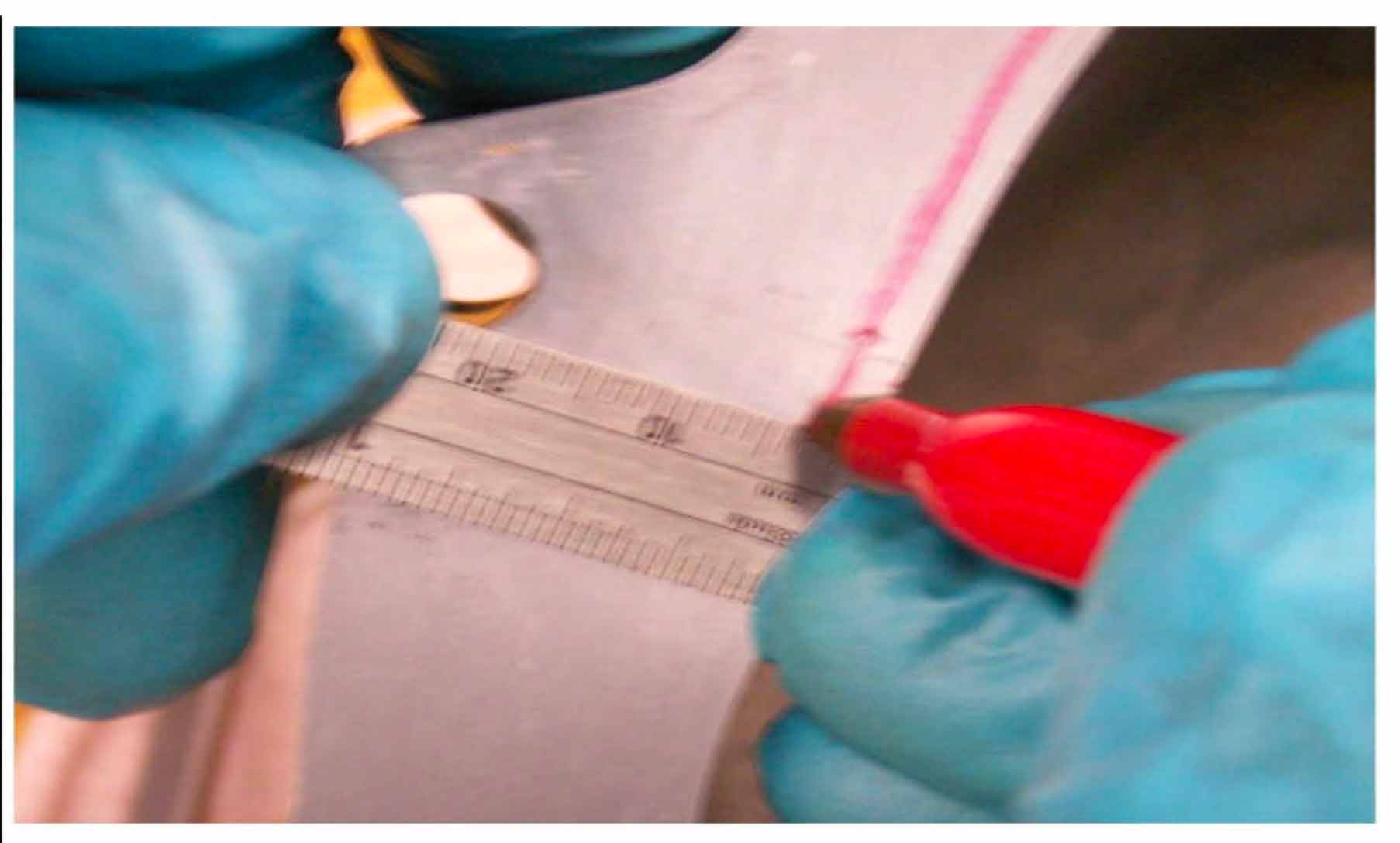 6. Measure 3 mm from the inside of the flange and make a line with a permanent marker. Note! This procedure can be made easier by making a template which can be reused for several repairs. 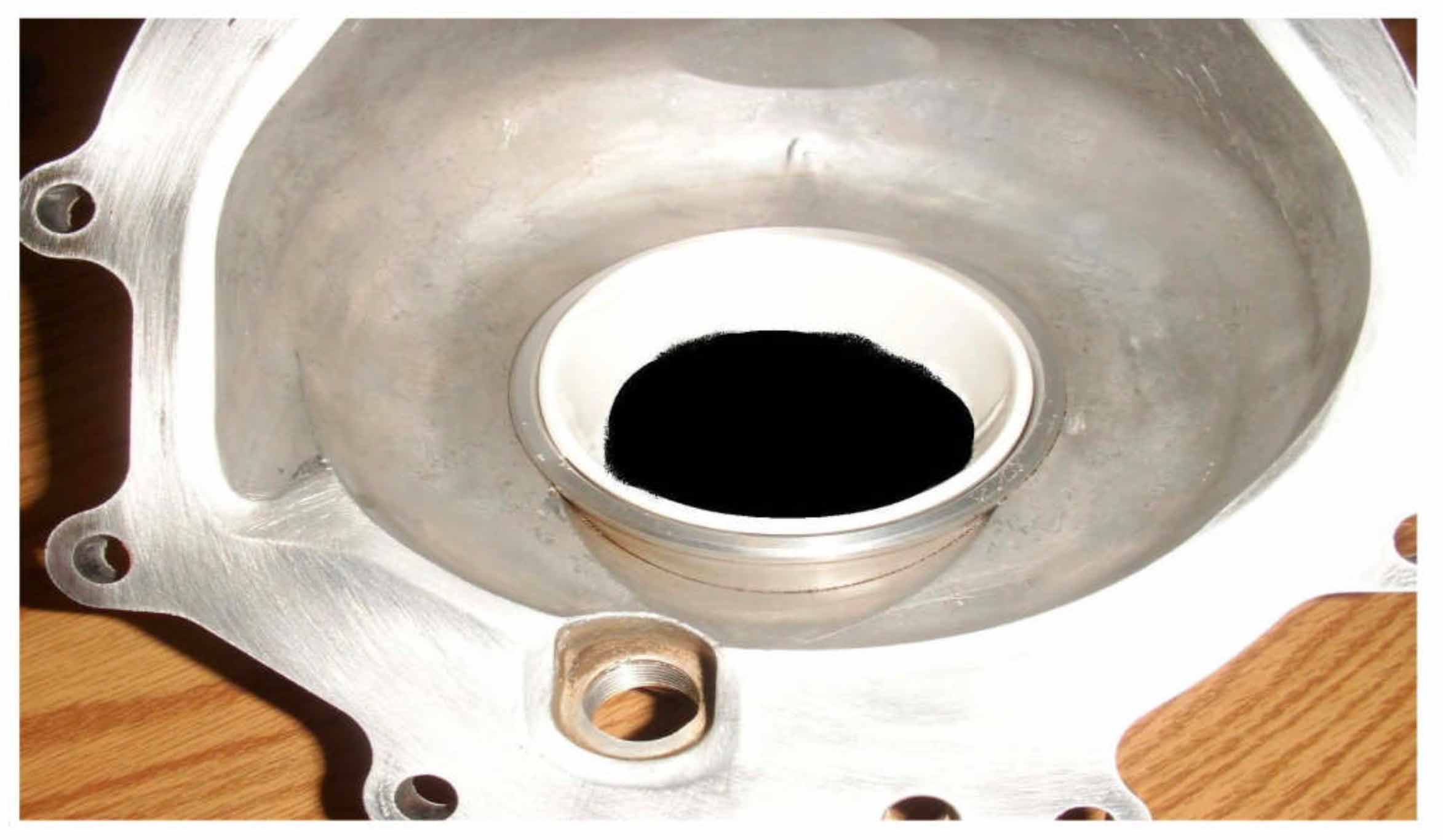 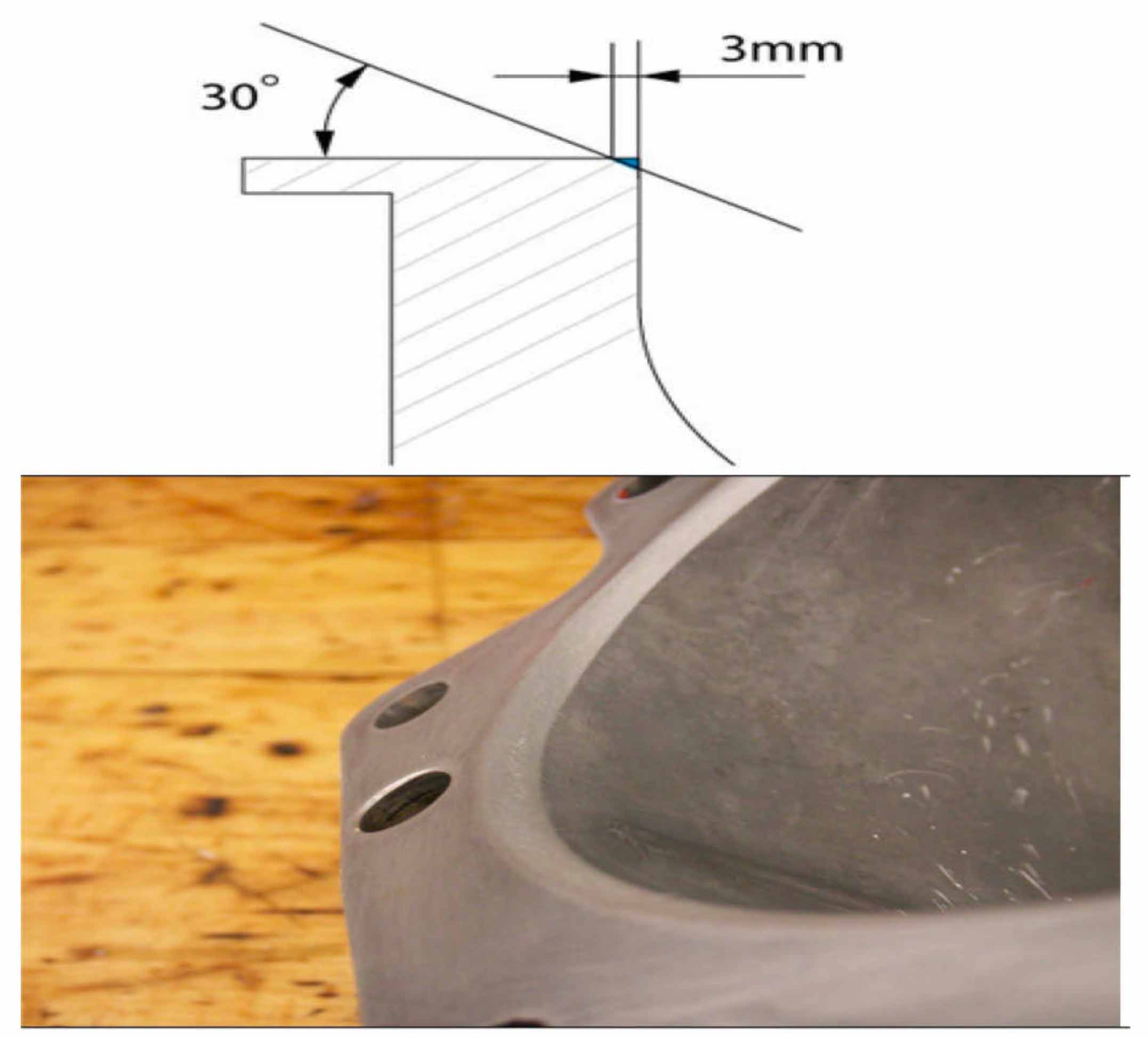 8. File off the inner edge of the cover as illustrated, following the marker line, using a file. The finished product should look like this.

9. After filing, polish the chamfer using a fine emery cloth so that scoring in the chamfer goes along the chamfered edge. 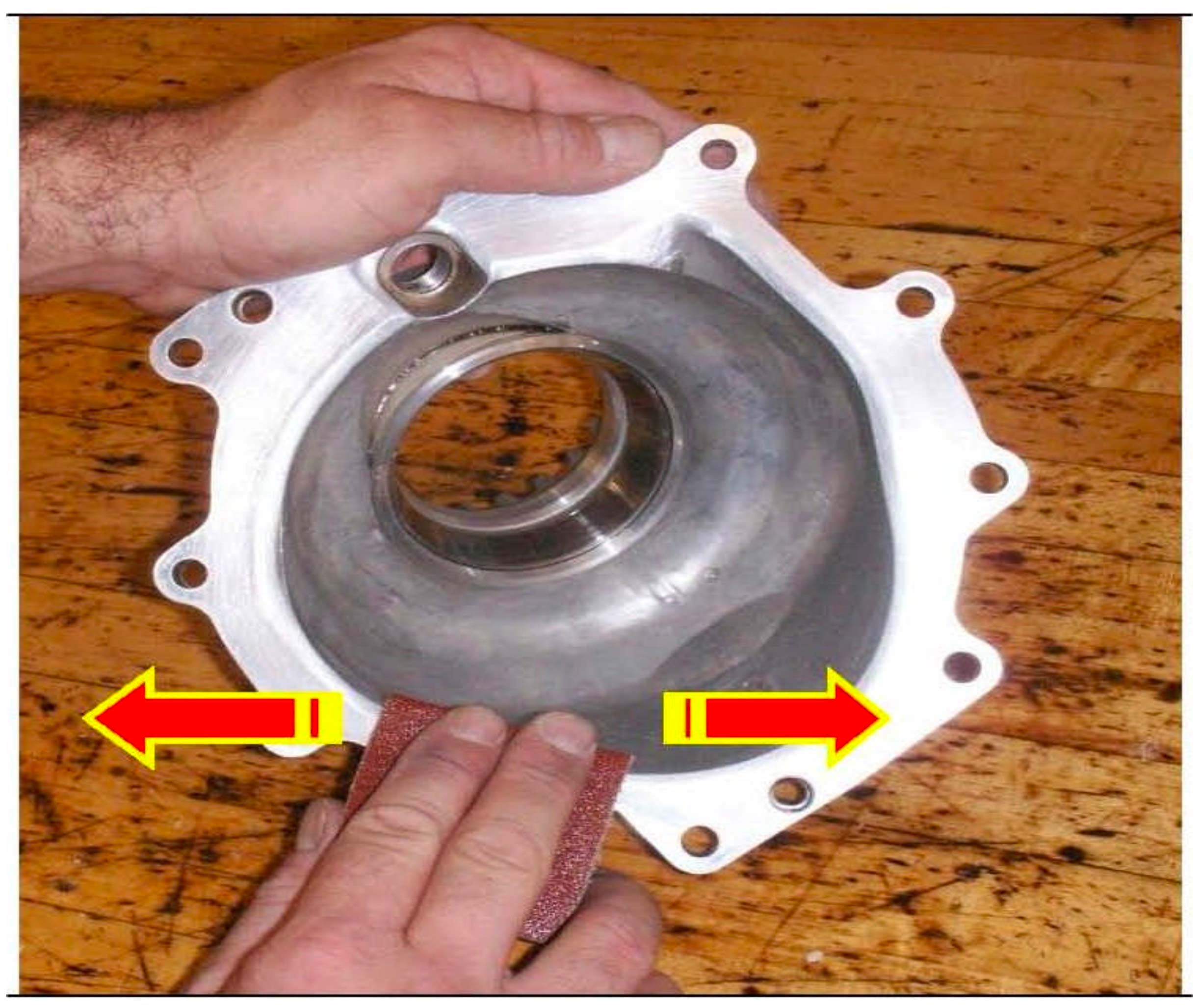 Note! Use the emery cloth radially, along the flange just as the arrows indicate. 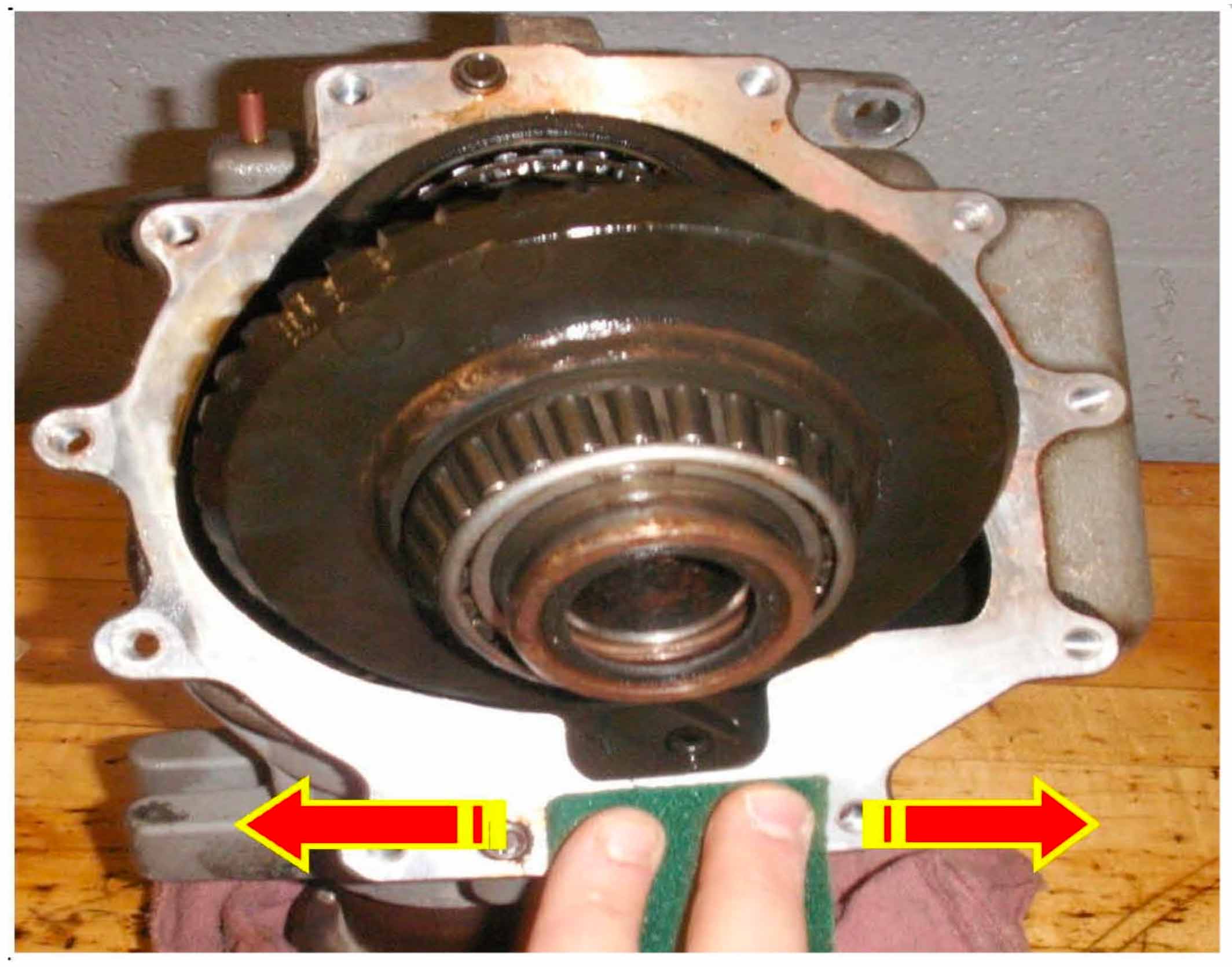 Note! Use the abrasive cloth radially, along the flange. 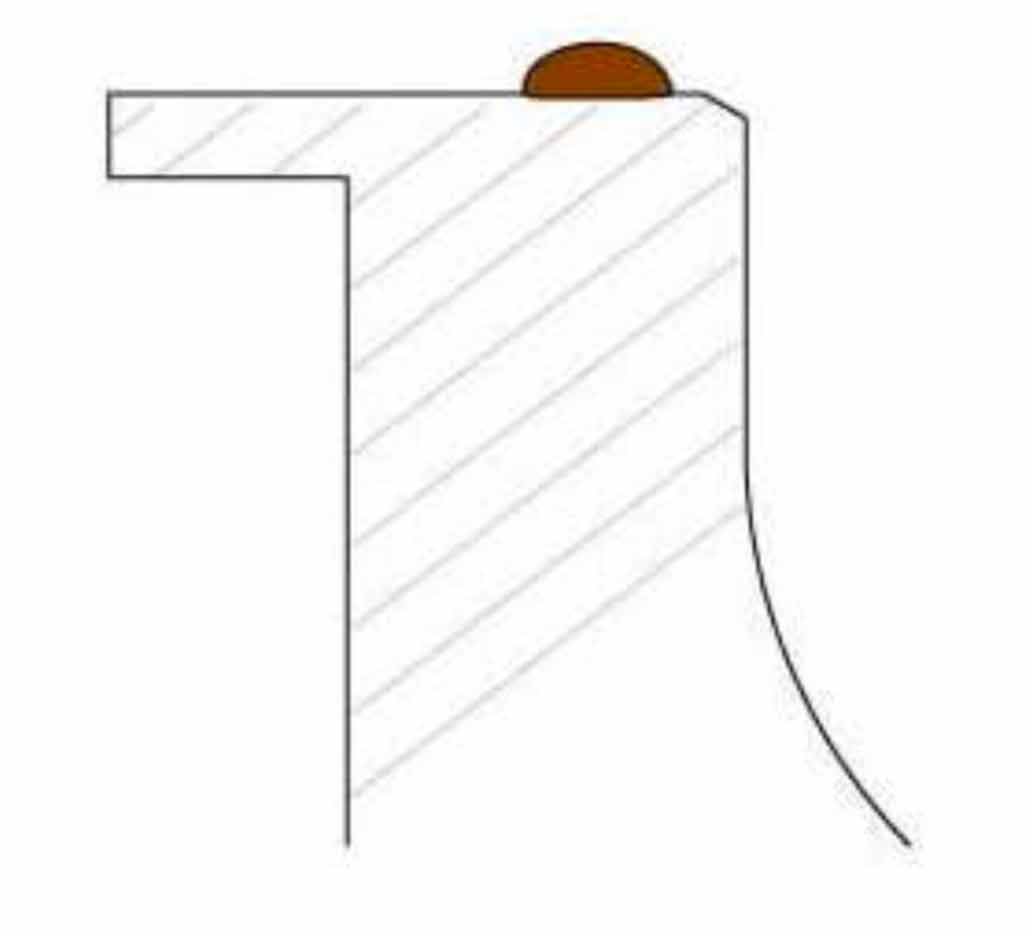 Note! The next few steps should be done within 5 minutes so that the angle gear halves are torqued together while the sealant is still wet. 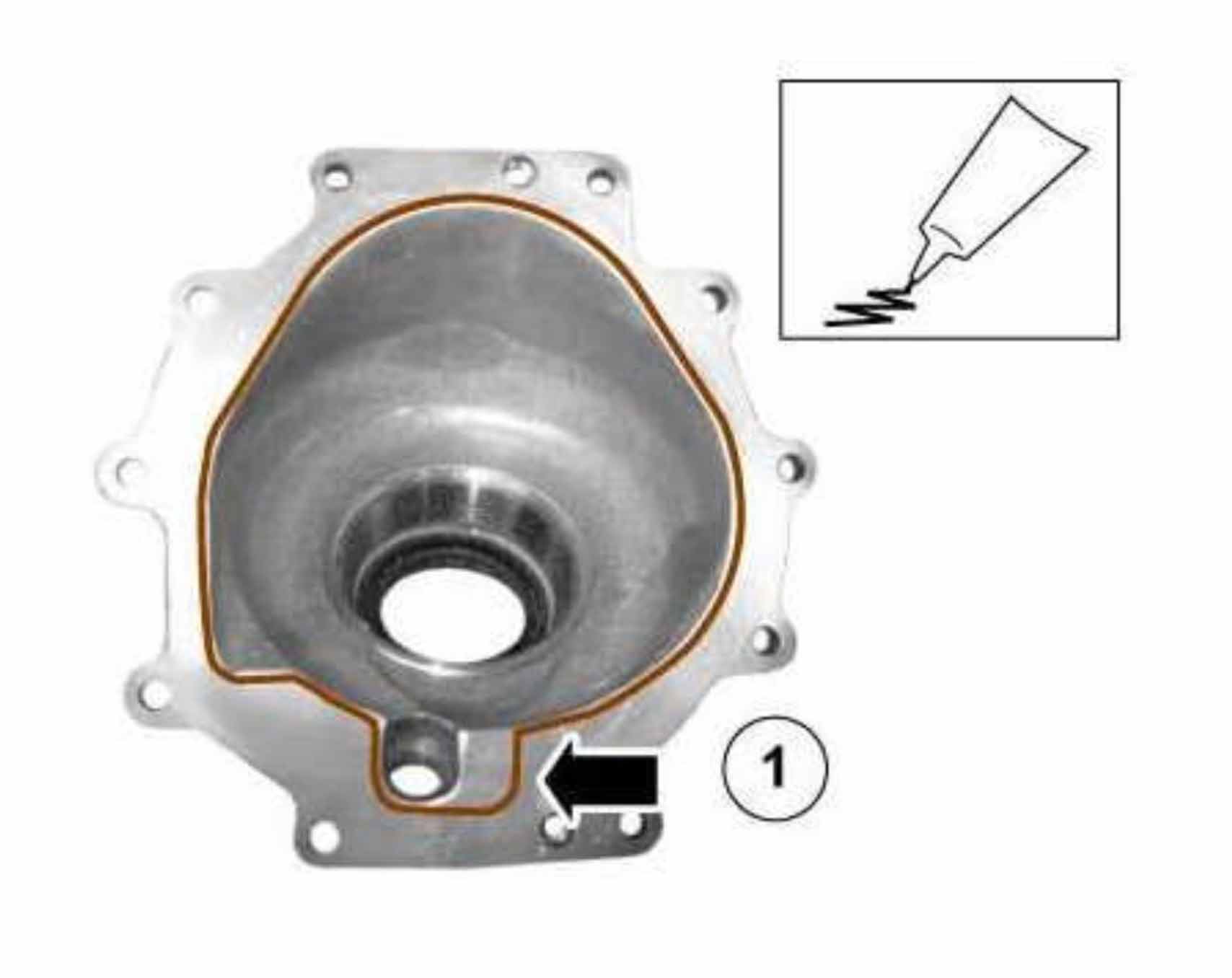 Pay close attention to the route of the sealant at Note 1 in photo. This is for the opening on the opposite half of the angle gear case. 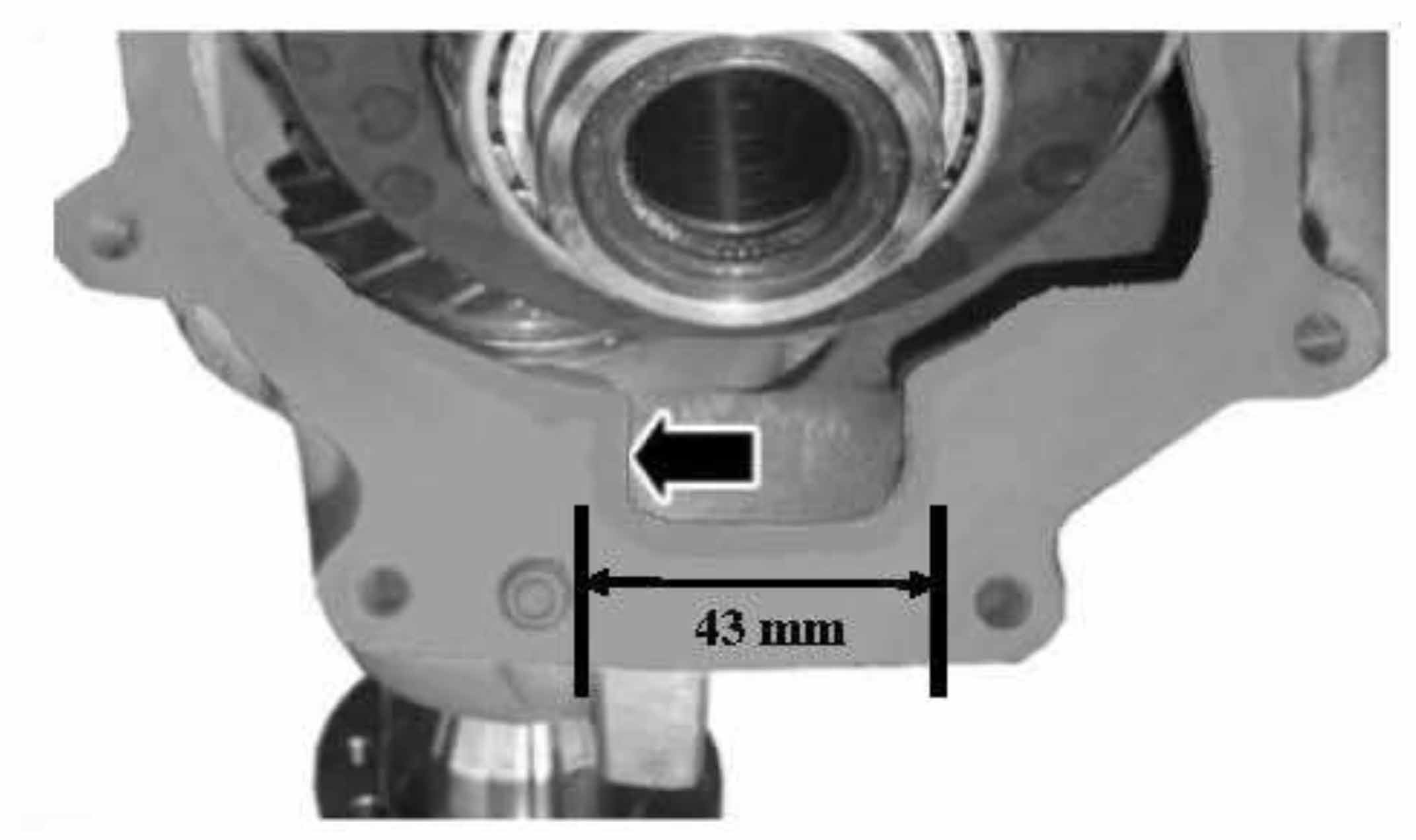 This is the opening that requires the 43 mm spacing in the silicone Do not apply sealant to both halves.

13. In order to aid in installation and to avoid affecting the silicone bead when reassembling the cover, set the cover over the locating pin marked “1” first, then carefully lay the cover down to lay flat on the flange.

Then angle tighten the 10 screws crosswise 85°.
Note! Some models may use studs in place of 3 of the screws.

Install the axle seal and preload adjustment nut 0-ring from the angle gear according to VIDA under Sealing rings bevel gear, replacing.

Note! Be sure to lubricate the sealing ring lips with wheel bearing grease, P/N 1161689 before installation. 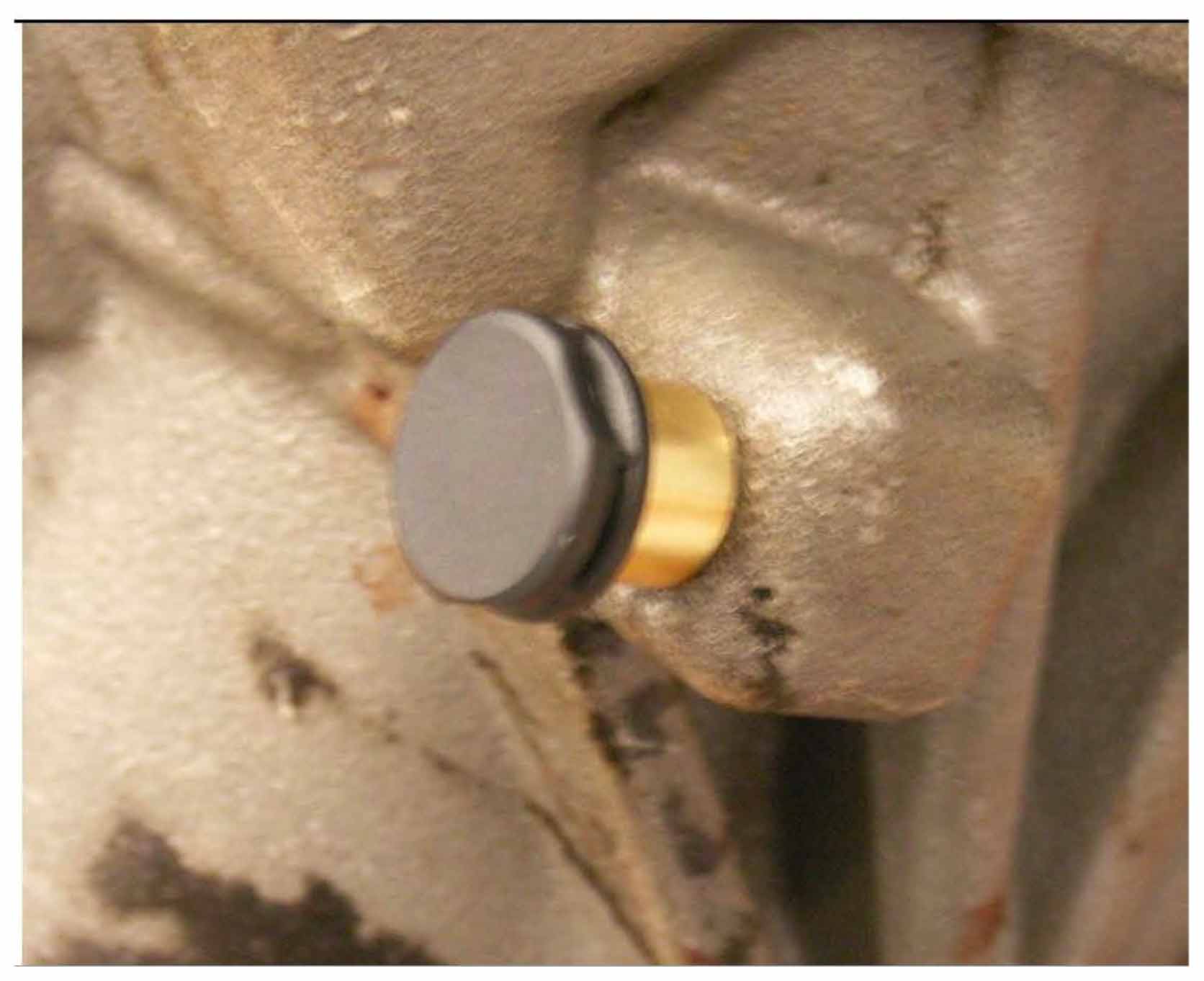 15. If the angle gear does not have the improved vent in place, as shown, install new bleeder pipe and filter.