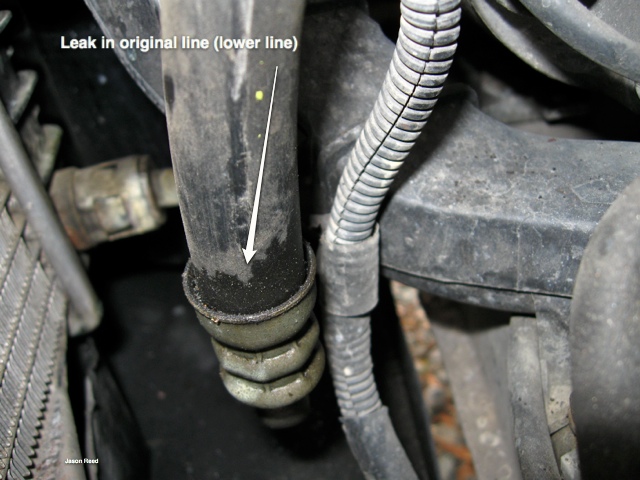 MVS Forums Contributor Jason (jreed) blasts out a beautiful, detailed, downloadable DIY on replacing oil cooler lines on a Volvo 850. This DIY is likely applicable  for any Volvo P80 model.

“The lower cooler line (lower = the one that goes to the lower inlet on the radiator) had developed a very slow leak at the crimp nearest the radiator. It was leaking just enough to start to wet the hose above the crimp. Many other people have reported finding leaks here and replacing these lines so I wasn’t surprised to find a leak starting on my hose. I decided to replace both upper and lower hoses at the same time to avoid having to repeat parts of the work later if the upper hose developed a leak too.”

“There are already several excellent guides on this job that have been written up, so many in fact that I wondered if it would be worthwhile to offer my own contribution. In the end I decided to go for it because I generally take photos anyway as I’m taking things apart to make sure I put them back together the right way.”

Under the car, loosen the 10mm bolt on the brackets holding the oil lines. I used a 10mm open end wrench for this job, one partial turn at a time. Once the bolt is loose I could turn it out relatively easily with my finger tips. This only took about 5 minutes – not as bad as I was expecting. I have read how others used a flexible joint and socket to remove the bolt. I tried that but couldn’t get a good angle on the bolt due to interference from the AC compressor bolt. Depending on the car, you may have to try different approaches to loosening the bolt.

Since others have mentioned that this part of the job was extremely difficult or impossible, it’s probably worth taking a look for yourself and giving it a try before you start in on the job. If you can’t get the bolt loose, then you’ll have the opportunity to go out and get a better tool, or even make the call to take the car to a repair shop. Loosening the bolt up in advance won’t hurt anything – just tighten it back up again afterwards until you’re ready to start the job.