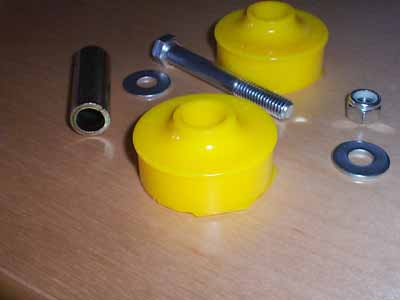 The 850’s upper engine mount is designed to hold the engine in place. Without it, the engine would thrash back and forth in the engine bay and damage nearly everything near it. There are two lower engine mounts that are responsible for the engine’s weight, but these are out of scope for this How To section. It’s easily spotted at the top of the engine a bit to the driver’s side (North American). When it decays, the results can vary from engine vibration felt in the cabin to violent shake and sounds from the engine bay. The upper engine mount, as it comes from the factory, is a molded rubber piece a little smaller than a baseball. This web page shows you how to replace this with an an OEM bushing. On the other hand, if you’re replacing the bushing with a replacement polyurethane mounts, you should use Replace your Upper Engine Mount w/ a Polyurethane Bushing.

Installing the Volvo OEM bushing takes more work than the 2-piece poly-urethane bushingmainly because the OEM is a 1-piece bushing that requires a pressing tool to force the bushing into the mount. Attempting to mount the bushing by hand is extremely difficult if not nearly impossible. Fortunately, Some ingenious fellows on the ‘net have come up with a variety of home-made pressing tools that can be assembled with a few dollars.