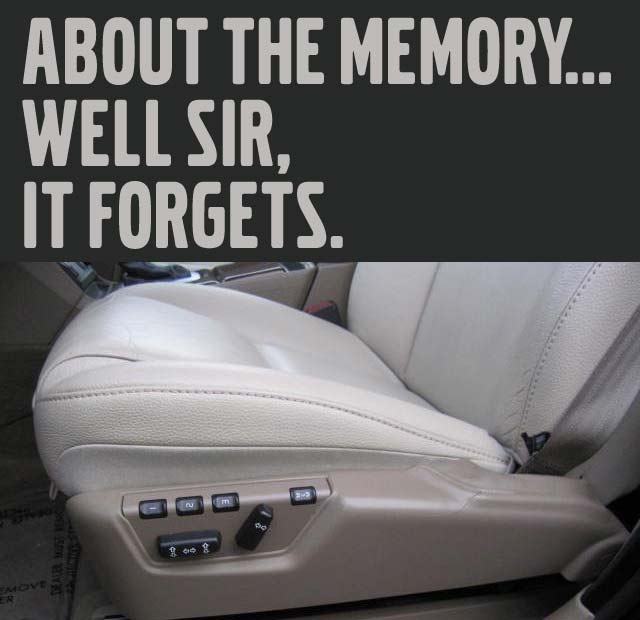 Anyone with seat memory skills? When I purchased my 06 S80 a few months ago memory 1 was the only one working. Then that stopped and it switched to mem 2 works for seats and mirrors, and 3 works for seat only. The key fob memory (where it resets to whichever key fob is used to unlock the car) is also erratic.

So – any ideas what might cause this and a possible solution?

Just to assure you are giving the memory system a chance: On that car the memory system requires that the car be locked and unlocked to trigger the memory acquisition and motion. The car only knows which remote because you open the locked car. Once driven and adjustments are made then locking the car with the remote and the computers shutting down sets the positions to storage. Now if the seat and mirrors are adjusted with another remote used to enter car then when your remote is used to enter it will know to go to your remote’s set positions. Avery common issue with the system is that a car is parked in garage at home and not locked as garage door is closed after you drive in. The store and car entry remote acknowledgement doesn’t happen when no locking and then unlocking occurs. Another issue arises if only one remote is used in that the car may leave home garage driven with one key by a second person. They lock car at some location and then unlock and drive to another location and lock again. Now their positions they adjusted when they drove car are set. You get in car at home and have to move seat and mirrors.

Sounds like bad system. In Europe home garages are rare and people lock cars when parked on street or in an apartment parking garage so making a system that triggers on locking and unlocking seems right.