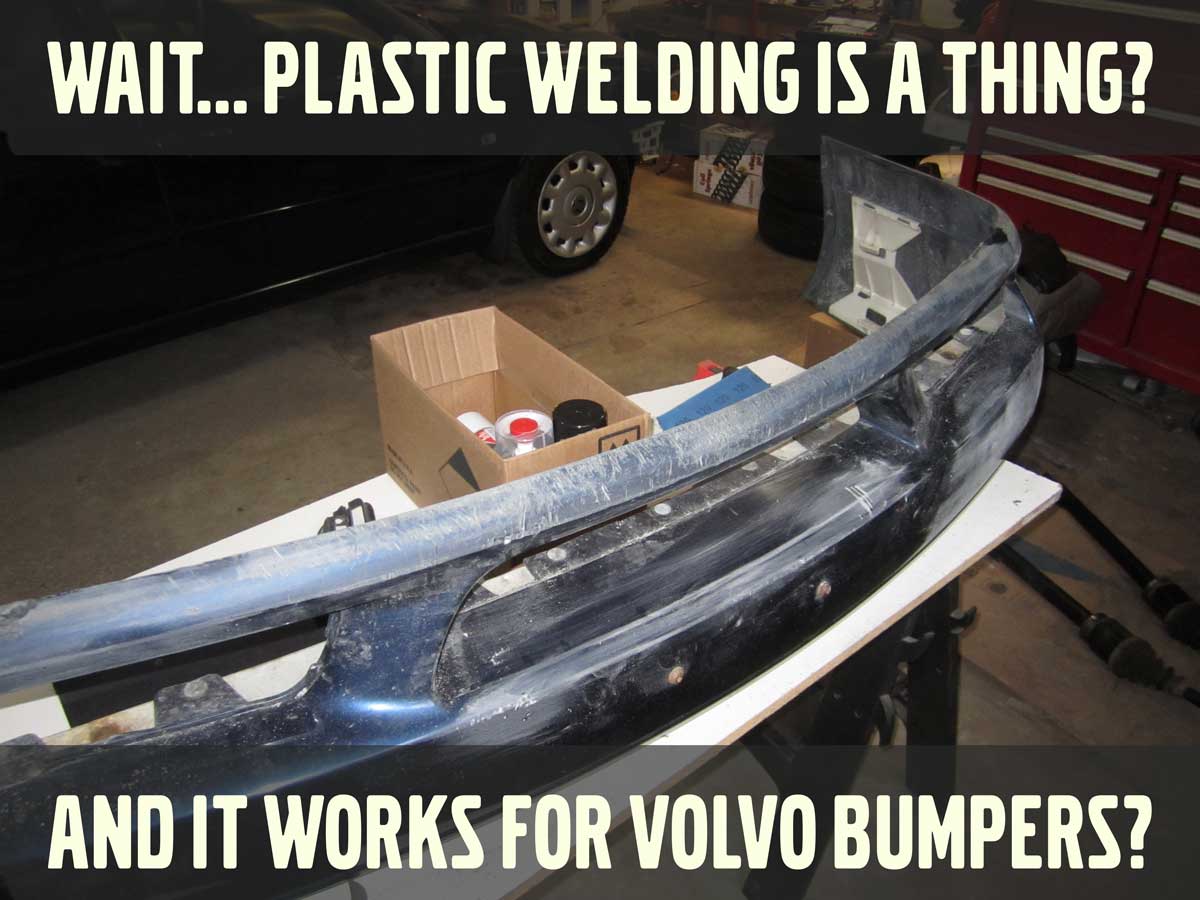 MVS Contributor Neil (scot850) continues to chip away at bringing his project 2000 V70 N/A base up to an aesthetic baseline and mechanical baseline, otherwise known as Stage 0.

For the aesthetics, there is a big problem: the front bumper and spoiler are all chewed up by 17 years of previous owners trying to make their V70 eat parking blocks.

So the endless new saga of the 2000 V70 NA/base continues. Hopefully the majority of the mechanical and interior repair work has been completed. Still some stuff to do, but the last major issue I wanted to tackle prior to returning the car to the road for shakedown runs (to see what else falls off!) was to try to repair some of the damage the PO had inflicted on the poor car’s front bumper. It appears the PO parked by touch in every parking bay she went into. The bottom of the bumper is totally scratched with deep scratches, and also a couple of ‘dog-ear’ tears in the bottom lip from presumably driving it over a stop block in a parking bay and then backing off over it and catching the bumper.

I had removed the bumper to fix the head-light wiper motor and in fact the whole washer system too which included the washer bottle too. As I hate doing body work due to lack of patience, I had thought I’d farm this out to pros, but due to a huge over-run I can’t afford to do that, although, I found that the cost of buying all the materials required to repair an ABS plastic bumper is also high. Anyway, the first task was to rub down the area around the cracks and I then planned to use special plastic 2 part glue to repair the cracks. I had even bought the double syringe dispenser and the 2 part glue and some web to spread over the crack for strength. But a chance reading of a Princess Auto sale catalogue, showed an new item on sale, which was a plastic welding kit for $55 CDN. That was cheaper than the double dispenser unit for the glue pack! So I returned the glue pack and dispenser and bought the welder instead.

Plastic welding isn’t something we talk about often here at MVS, so this is an interesting and novel subject for me. Welding the plastic of Volvo bumpers and front spoilers is best done when they are removed from the car and inverted:

My process included cleaning the area first using wax/surface cleaner, then rubbed it down to key the area around it, but I think the last part is overkill as you will melt the plastic around the damage with the heat anyways. I then ‘V’ notched the split both sides of the bumper (I.e. front and back) and only then added the plastic. It is definitely easier to do whilst working from above the repair (horizontal) or the repair is vertical. Trying to repair it from underneath was a was of time as the plastic tended to fall off before it bonded. I made the mistake of trying to repair the rear from below, and was able to do it, but it will not win any beauty contest any time soon! However, I did make the repair at the back a little thicker for added strength.

If you’d like to read more about Neil’s experience plastic welding his Volvo’s front spoiler and bumper, read more by clicking the link just below this sentence.