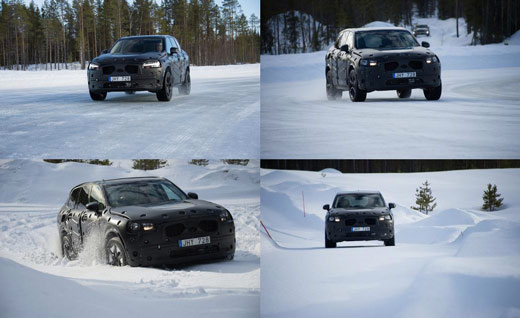 Based on the design language introduced by a gorgeous trio of recent concept cars, the next-gen model is slick and smooth…

Bravo. After the concept cars, this is really not a surprise.

the XC90 has a central LCD screen above a single knob flanked by three buttons on each side—plus the start button adjacent to the steering column. It’s very much in the Bang & Olufsen “less is more” control philosophy, and it looks clean, elegant, and attractive.

Fewer buttons and simple design promote safety because the driver spends less time looking down at controls while driving,

You can pinch, expand, and swipe the screen to do various tasks, and these gestures deliver responses that are slick and smooth, just as they are on the best tablets

NICE. This means many drivers will know how to use the system before ever sitting in this SUV. Again, safety.

the XC90 will be among the first vehicles to offer Apple’s iOS CarPlay integration.

CarPlay is a way to use your iPhone through your car’s screen. I’m guilty of having looked at my phone while driving once or twice. There’s probably no need to let you know that text size seems even smaller while moving, so doubling or tripling it will make a big difference. Also, there’s the physical aspect of using a phone in a car, even if it’s only voice commands: you don’t need an extra hand to hold the phone. Just keep it in your pocket while driving and you have essentially a virtual phone on the car’s infotainment screen.

As an admirer of Apple tech and iPhone owner — albeit an ancient, original 2007 iPhone that I’m certain won’t work with CarPlay because of its age — this is great news.

The driving position in the new model is excellent, and visibility is good all around… Visibility to the front quarters is also good, as the A-pillars aren’t too thick.

On higher trim levels, the entire cluster is a 12.3-inch screen that is fully configurable to provide whatever information you deem relevant. The XC90 will feature an optional head-up display.

Sounds like they’ve created another great cockpit. This is a Volvo hallmark. Read my thoughts on the Volvo 850 cockpit design.

Volvo says the XC90 is “a true seven-seater, with a focus on ease of use.” The second row is spacious, with plenty of room for even boot-clad feet below the front seats… the 2016 XC90 is about four inches longer than the old one. It’s also a little wider and slightly lower.

Despite the size increase, Volvo engineers promise the seven-seat XC90 will be at least 220 pounds lighter, thanks to extensive use of high-strength boron steel and some aluminum body panels.

…this XC90 marks the first use of the company’s Scalable Product Architecture (SPA), which eventually will undergird every Volvo size medium and up.

Good to see Volvo is keeping up with the rest of auto manufacturers in reversing a 30-year automobile weight gain trend. Weight is half the MPG battle, and it’s difficult to pull off because car generations can be a decade or longer, and shedding weight without starting from a clean sheet is problematic. (The current XC90 generation is entering its 12th year of production!) 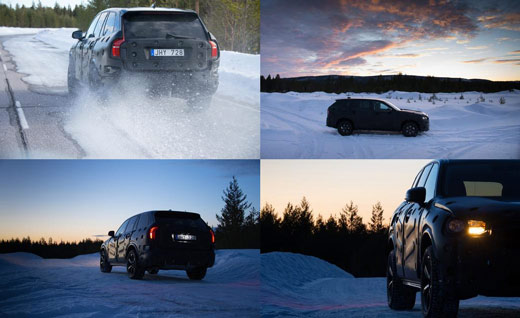 Volvo has adopted a pure four-cylinder philosophy across its passenger-vehicle lines, all of which are derived from the same Drive-E engine architecture.

It delivers 302 horsepower and 295 lb-ft of torque and is coupled to an eight-speed Aisin-Warner automatic gearbox.

The big turbocharger needed to extract 302 ponies from a 2.0-liter engine would usually produce sluggish response at low revs, but Volvo has fitted a supercharger

Gas, diesel and a plug-in gas-electric hybrid model (will be the top $ powertrain option)

Well, whether you like it or not, every engine in the Volvo lineup will be a four cylinder. It will certainly be odd to see a large automobile like the XC90 not only have a 4-pot available in it, but that the 4-banger be the only cylinder count choice.

There will be versions with conventional suspensions, as well as those with air springs and electronically adjustable shocks. When you order all-wheel drive, you get a Haldex system that diverts torque to the rear wheels when it senses even a smidgen of slip.

Good. No big changes here, and lots of choice… important because SUVs are tasked typically with a greater range of climate, cargo and terrain.

I think this SUV will be a huge winner for Volvo. Let’s see if my prediction capabilities are good after first-year sales numbers are available in ~18 months.

Volvo XC90: The Next Generation