Note: 1979 is the closest I could date this document. If you know it’s a different year, please let me know. View/download this catalog (PDF). Volvo R Sport – A new name representing a new era in Volvo performance and competition. Volvo’s long established competition department in Gothenburg, Sweden, formerly known as Volvo Competition Service, […]

Now-MVS Contributor amblerman crushes it with a beautiful squeaky dash repair DIY with photos and helpful steps, tools and required parts. He completed and documented this repair on his 1999 S70. amblerman »  Here’s a report on how I repaired my squeaky dash. I acquired a 1999 S70 with 110K on it back in late 2016. This was […] 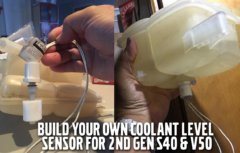 Why Build a Coolant Level Sensor? MadeInJapan builds his own coolant level sensor for his S40 because this common item was not included on 2nd generation S40 and V50 models, oddly. I’ll let him explain: Why? Well, because our cars don’t have a sensor in the expansion tank (reservoir) to tell you when your coolant […]

MVS member Bob had the common flashing arrow light on the dash of his 1995 960. While looking at the wiring harness connector (8 sockets) that plugged into the PNP switch connector (8 pins), I noticed one wire looked “funny” – and for good reason. It was no longer connected to the crimped on socket […]

MVS Forums member bwk97volvos4005 shows us how to fix burnt out speedometer LED bulbs on his Volvo S40 with photos and tips! My 2005 S40 speedometer LEDs quit working. These are little LEDs that are soldered directly to the board that controls all gauges. There are several posts on how to get the gauge cluster out. Once […]

Need a Dash Rattle Ghetto Fix ? MVS forums contributor and Volvo DIY Wizard™ cn90 slays yet another job with an outstanding and quick dash rattle fix: My 1998 S70 is now for my kids to use for high-school. I simply don’t have 6-8h to take the dash apart, so I resort to a “Ghetto” […]

MVS Forums member  JBRollo: I have been trying to fix a code P1657 on a 2000 Volvo S70 for about a week. No other symptoms at all. Finally noticed that the ETM warning light was not lighting up on start. I first thought someone cut the wire but I got lucky. The bulb had been […]

Replace bulbs in pairs. Bulbs dim with age. If one side went, the other is probably close and can look dimmer than the new one on the other side. The used one can always be put back in the package, marked as “used spare,” and kept in the trunk.

Typical symptoms – erratic ABS, CEL STS or other lights – often coming on after a bump in the road. May or may not be controlled by thumping steering column.

My dashboard mount saga began about 5 years before this post with the purchase of a 1996 850 Platinum Edition turbo. When I purchased the car the right hand side of the dash was literally flopping around when going over bumps and all of the movement resulted in a lot of noise. I pulled the dashboard and the initial repair was documented in Volvo 850 Dashboard Mount Repair.

Fast forward 5 years and the evaporator decided to give up the ghost. Following the same procedure as before, I removed the dash and set forth to replace the evaporator and restore the air conditioning in the car. Over the 5 years and 75,000 miles the dash had started to get noisier and it would squeak badly if the car was left out in the sun or if the defroster was run on a high temperature in the winter.

The end result is a nice-looking, nice-functioning boost gauge that dims with the rest of my 1997 850’s instrument gauges. Because it’s mounted up high it’s unobtrusive, and far less likely to be seen by street racers, cops or thieves. It’s there when I need to know boost, and invisible to me all other times. It’s slightly nearer to my field of vision than any of the other mounting positions I tried, so my eyes are on the road more.