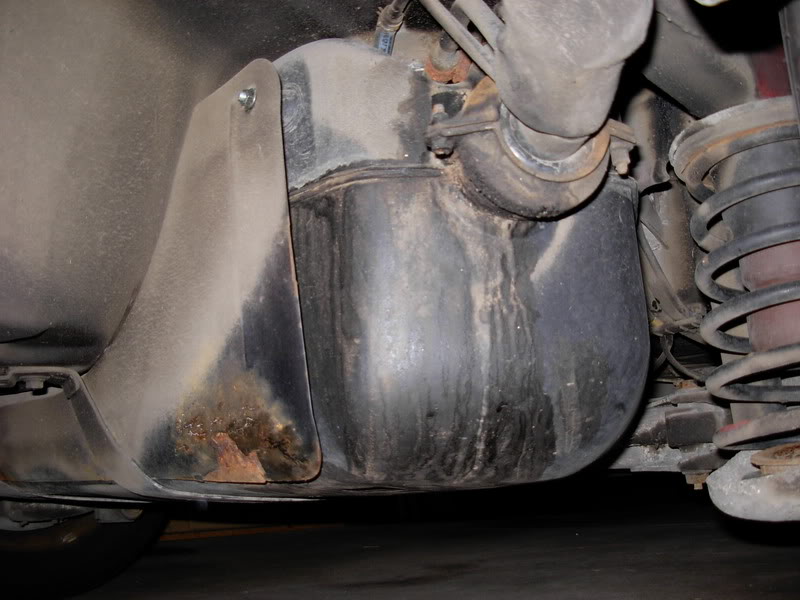 Read this discussion on the volvo fuel tank leak.

A compromised flange may leak fuel and/or result in a fire. Owners are instructed to bring their vehicles into the dealer for inspection. If the part is defective, Volvo will replaced it with modified flange at no charge. The recall campaign is scheduled to begin in January 2010.

Unfortunately this started leak hapening about months 6 after they fixed the recal… I still think they may have botched it, do you know if these seals or whatever they replace are available aftermarket?

This discussion is very interesting to me. Here is my experience:

Two days ago I took my ’96 850 turbo wagon to the dealer for the same fuel tank leak problem. When I filled the tank, fuel would run out of what appeared to be the filler tube. In reality the hose on top of the tank was cracked and leaking. The leaked slowed as the fuel level in the tank dropped. The technician looked at it and said that the cracked hose is not unusual. Question: Could this hose have been replaced by removing the plate under the rear seat to get at the top of the tank?

The total cost to replace the hose was $425! When I asked about the cost, the service advisor said the job takes four hours as the tank needs to be dropped to get to the hose. I asked about the recall and he said it was not for leaks, it was to replace the pads that keep the tank from rubbing on the body and frame, and that it was not related to the problem in any way.

However, it took the technician only two hours to do the whole job. When I asked the advisor about that he said that they use the Volvo Flat Rate guide and that is what they charge, no matter how much time the repair takes. He said it was for “my protection.” The labor charge was $380 (3.9 hours per the

I replaced this hose on the top of my fuel tank and it was one difficult job. I dropped the tank when it was almost empty. the tank is rather light and does not need much in the way of support. However access was a devil. I did not think of access from the access panel under the seat, but i do not think it possible.

The exact part for the hose I replaced on my 98 S70 I will try to find, but I ordered it from my dealer, since I could not find it online. Do not order the clips, even though the dealer convinced me to do so, since any hose clamps will work, only that you will need a smaller and larger one for the 2 different diameters. I think the job took me 3 full curse-filled hours. Didn’t fix the problem of the smell of gas fumes when the tank is full, though. I have yet to find a leak or what is causing the smell. And the rubber gasket between the filler tube and the tank is okay and a very do-able fix, especially when the tank is dropped.

Jason, thanks for chiming in. People are going to complain about things, that’s just the way business is. I think it was a perfect storm of the repair not falling under a $0 recall + sticker shock.

I think you’ll find universal agreement in placing a great deal of importance on a mechanic’s experience, but also a great deal of not wanting to pay for it, like any service.

Pro mechanic here. The labor estimating guide is typically what shops use to determine what to charge for a repair. It is basically the amount of time it should take the average mechanic to complete the job on a car in average condition (no unusually rusted fasteners, etc. Typically, most shops charge based on that number, regardless of how long it took. Here’s why: Take 2 different technicians. Tech 1 has never done a particular job before, and doesn’t have the special tools that the manufacturer supplies to make it easier. The book says the job should take 3 hours. He completes it in 6. Should YOU have to pay a penalty because the guy who did the work lacks experience and had to make do with different tools? Of course not. Conversely, the other mechanic has done the job dozens of times. He also made the significant investment in the special tools, because he does so many of these that it was worth it to him. He’s able to crank out the work in an hour and a half. Now, should THIS mechanic take a hit financially, and charge less for the job because he’s really good at the work, and can do it faster than the average quoted by the book? That would be absurd, as well. That is why they charge you what the book says, regardless of how long it actually takes. Manufacturer’s special tools are stupid expensive, and usually are made to do one thing, and one thing only. Example: I have the tool kit for precision setting the timing on a white block Volvo engine. (It’s a bar that locks the 2 cams together so you can adjust the gears, plus a pin that holds the crank perfectly at TDC so you can adjust the gears without moving the crank. My set also came with the tool to press the “valve cover” in place- basically 2 absurdly large wing nuts and 2 rods that thread into the spark plug holes. You CAN change a timing belt without it, but it takes longer, and without the tool, the timing is usually off a tiny little bit due to manufacturing differences in parts. Also, if you have to replace a cam or one of the gears, etc, this tool is essential. Anyhow, I have this set, made by an aftermarket company, and this one set of tools cost me over $300. It only does 1 thing. But it lets me do that one thing faster and better than a tech that doesn’t have that tool set. Is it fair to me to get paid less for the job, after I shelled out the money for tools that enable me to get the car back to you faster, not to mention a repair that was slightly more precise? No. It’s not. So please don’t complain when your shop charges you book rate, but completes the work in a shorter time. It’s likely because your car just got fixed by someone who really knows what he’s doing.

I was told I needed tires “the cords were coming through” and rear brakes.

I could not wait and I took the car home to my garage I have used for the past 30 years. He never worked on my volvo, and when he inspected the failed car, it passed the tires were good and the brakes were good.