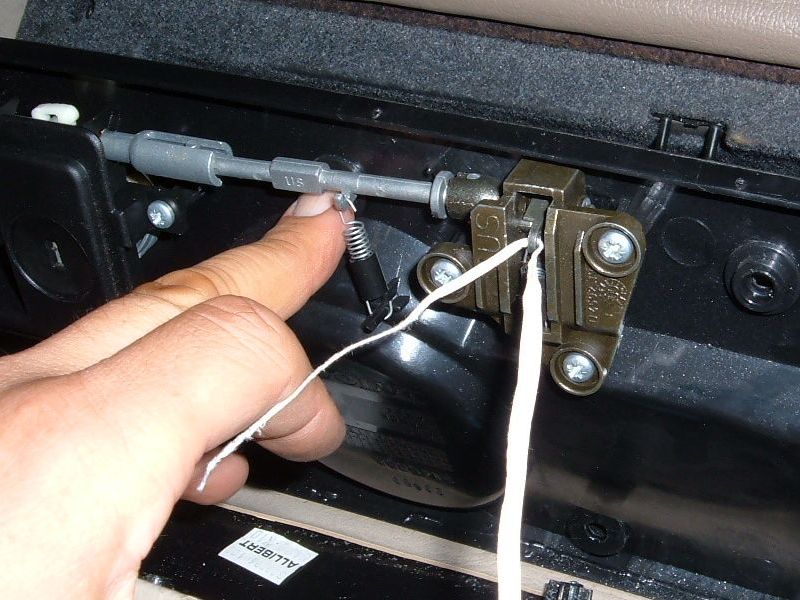 Is your Volvo glove box broken?

If your Volvo’s glove box is stuck and you’ve exhausted all ideas on how to fix it, you should take a moment to see what other MVS forum members are saying. You’re not alone in your frustration. Chances are that you have important items that you need to get to in said glove box. Good news for you, there’s a known fix and it doesn’t require much time or effort, just some attention and a simple tool.

I found awesome great advice on this site. I have one hope it helps someone, let me know.
My glovebox latch broke on my 93 850GLT. The door handle would not unlock the box. I did the hacksaw trick. I used two large thin metal putty knives on either side of the hacksaw to protect the vinyl. Put the saw blade between them and cut thru both sides of the U shaped latch. After cutting thru both sides of the U shaped lock the door was open! The dealer in Ohio wanted to sell me a complete glovebox door, (over 100 bucks)! I had the parts guy pull up the schematics to see how to install it. I noticed the locking mechanism had its own part number. So i purchased a lock/latch mechanism kit and it had the U shaped bar in it that I had to cut in two to get in the box. Cost me about 17 bucks. Take the door off of the dash. Remove the door liner screws and door liner to expose then locking mechanism. >> Pay close attention to how all the gears and levers come out<<<
Reverse install the new hardware. Reinstall the door to the dash.

I did the same thing to my glove box.
the latch is broken at the position where the shear stress is very heavy.
Unfortunately, I can see a pore there, which is a casting defect.
the latch itself is around 40 dollars, so I just bought a used glovebox from Ebay, where I got everything including the pocket…..

Another alternative to replacing the lock catch on 850 glovebox… Saw the catch 🙁 best option, sorry. After ‘splitting’ the glovebox lid, remove the triangular shaped catch mechanism that is held to the lid with 3 screws. It is directly in line with the sawed catch. You will notice a small casting that has a pin (usually the broken bit) about 3mm long enabling the catch to be released. I carefully drilled the cast piece where the pin was located, with 2.5mm drill, found a good quality machine screw with a 3mm thread about 8/12mm long, created a thread by easing the new screw into the 2.5mm hole with some pressure until it is flush at the back the hole. Re-assemble with some loctite on the thread. Saw of the excess length so there is about 5/6mm shaft left. File off the sharp edges. The ‘new’ pin should slide nicely in the curved slot and so enable release of the catch when engaged. You will only need to buy the hooped catch which is affordable. Maybe have a ‘dry run’, you don’t want to saw again. So, test with the new part and repaired catch before you screw it to the glovebox/dash. Some lubricant to keep all it moving and voila. I hope this description is clear enough. It was all a bit ‘micro’ for photos. All went quite smoothly and saved me US$100 for a new catch mechanism! Might even be more durable