Download the PDF: How to adjust the hood release cable on all FWD and AWD Volvos up to and including model year 2000 (North American model year).

I had an annoying problem with my 2000 V70 XC and I couldn’t find any references to figure out and fix the problem. When I pulled the hood release handle inside the car, the driver’s side hood latch would still be locked when I tried to open the hood.

I would have to pull the handle a few times and eventually it would unlock the driver’s side latch or I would get someone to pull and hold the latch while I lifted the hood. Needless to say, this drove me nuts. I then began to examine the car using the one diagram I had of the hood latch release. I would assume that this adjustment would work on a number of Volvo models, but I am unsure. What follows is the method I used. This method seems to work perfectly, but your mileage may vary!

A simple question from a simpleton……some time during its life my S70 had a bang on the front side (the evidence is there) the hood is not properly fitted because there is a gap on one side of about 5/16″ and only about 1/8″ on the driver’s side. One of the releases doesn’t always let the “U” bracket come up and out of the jaws in the latch and I can’t open the hood. How can I re-align and centre the hood?
Please note the US terms I have used here in the spirit of co-operation between allies.

tailor » The hood release cable just broke, here are the pearls of wisdom that graced me in my unheated garage on Saturday.
Tools that you will need( some for subzero temps) 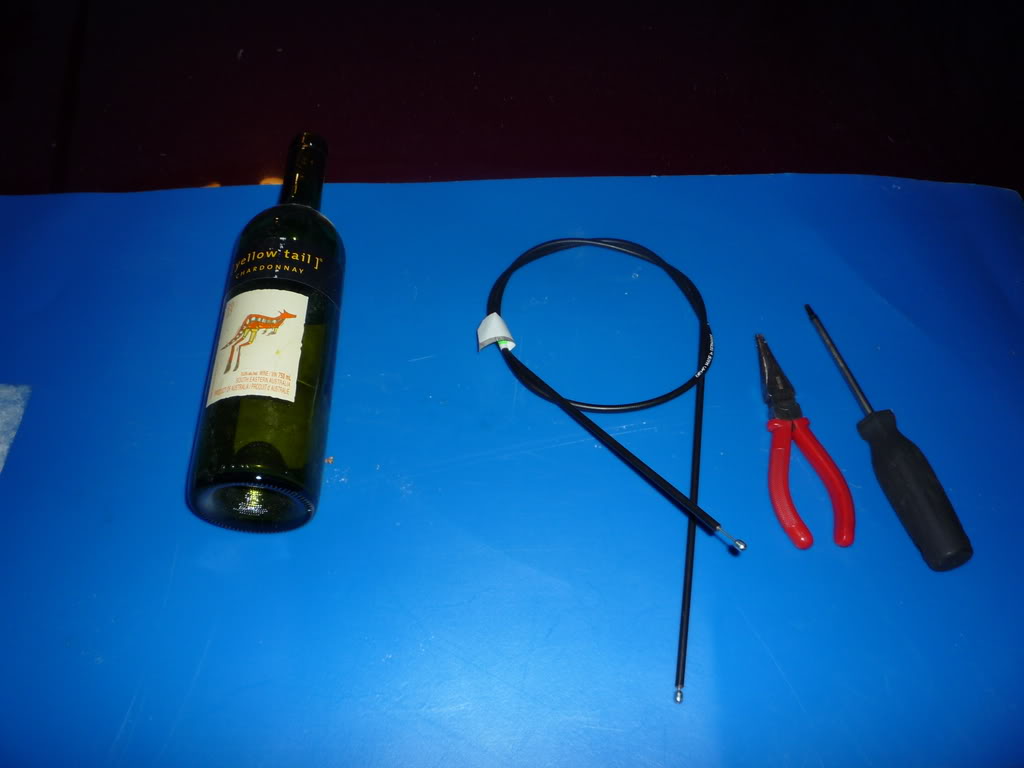 There are two cables that are needed to open the hoods on 850’s and 70’s, this may apply be for other models as well. One cable runs from the inside handle, drivers side, through the fire wall to the left hand hood release catch and another that runs from the left hand release catch to the right hand side release catch.
If you drive on the “correct” side of the road, like Bill of Durham then it would be the opposite way….right to left.

I would think that the vast majority of cable replacements will be for the first cable, mine broke where the pin is crimped, this pin slides into the hood release handle in the cabin. 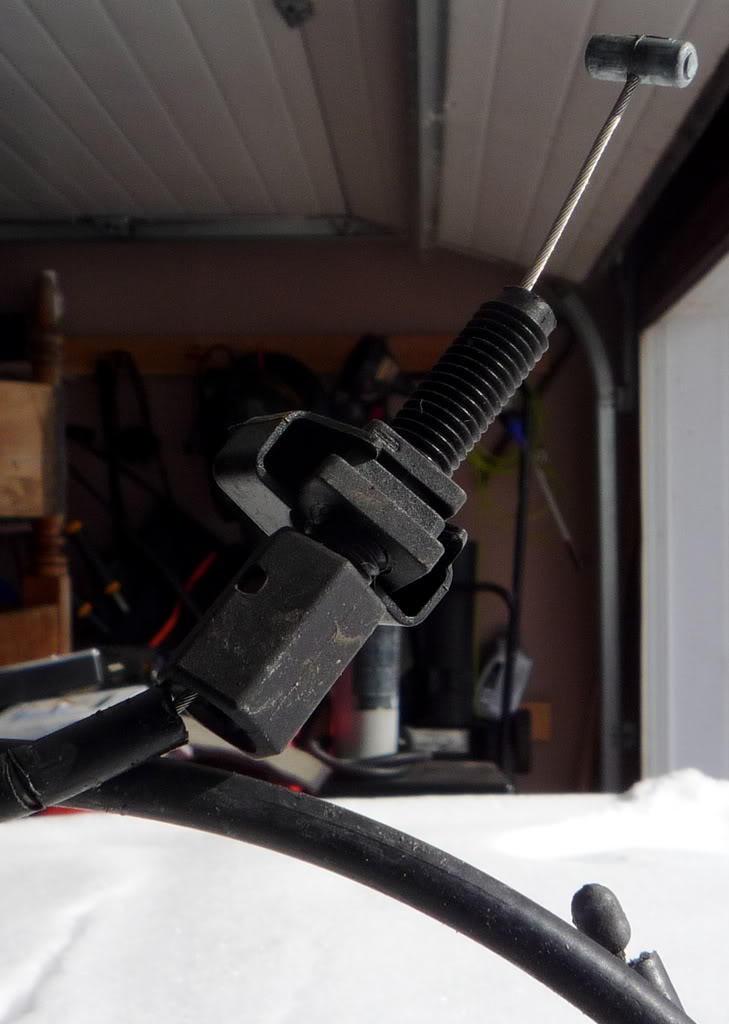 I removed the three screws to access the kick panel on the drivers side, it allows better access to the cable, and opened the hood by grabbing the end of the wire with a pair of pliers and pulling. 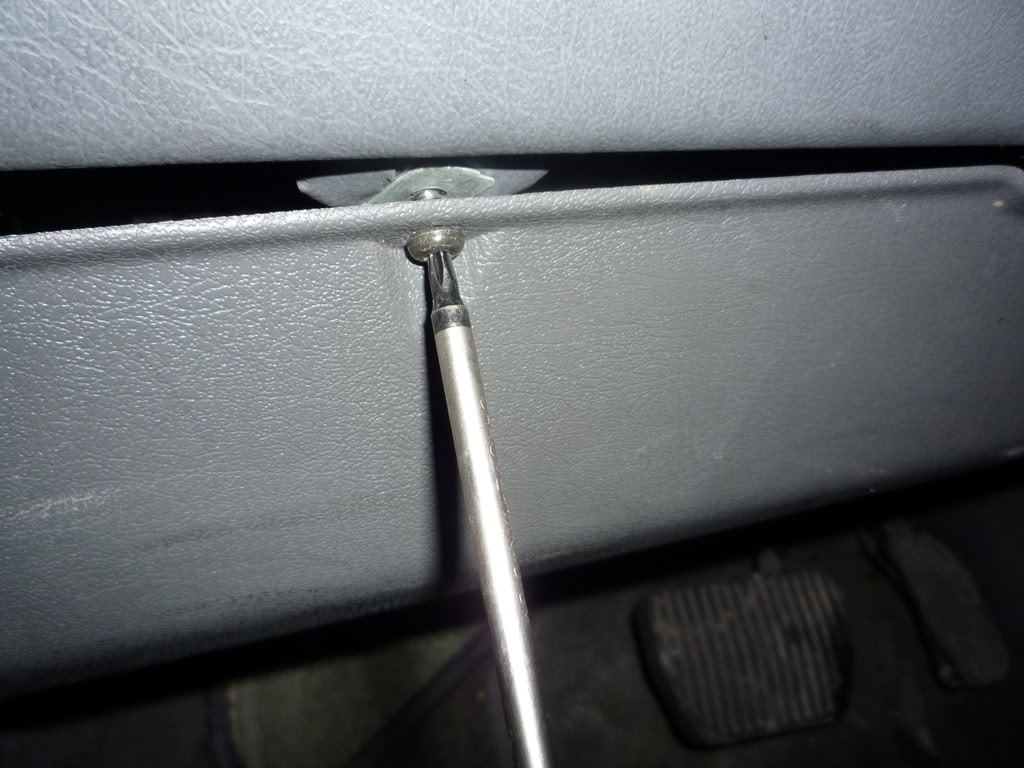 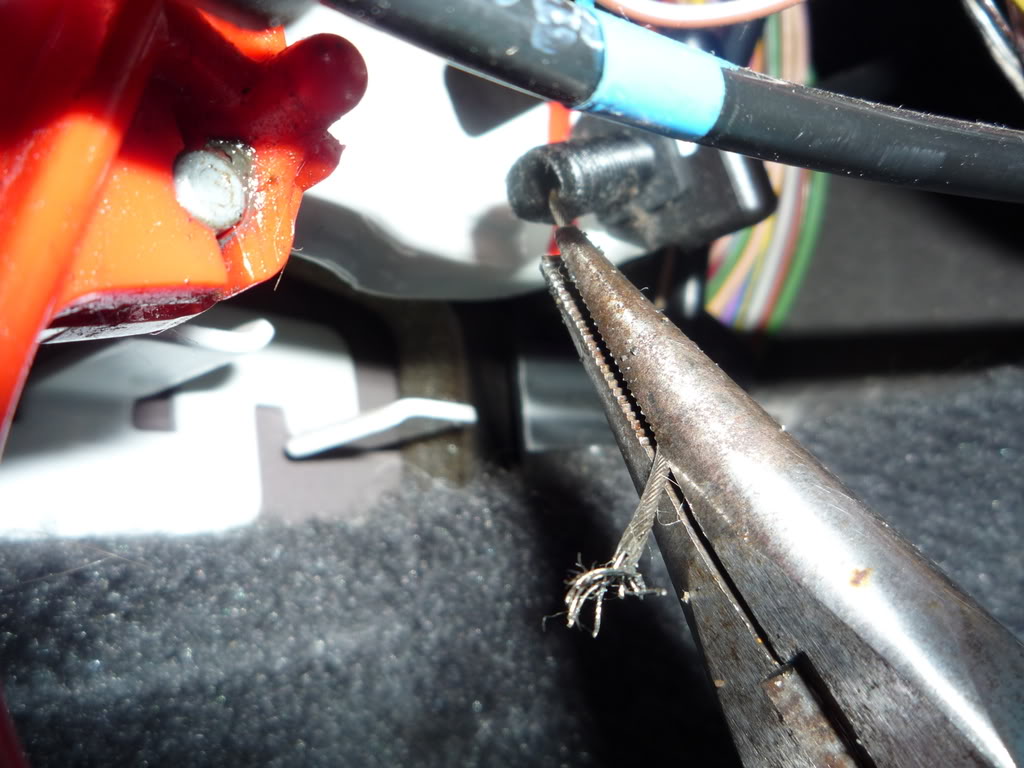 If the break is at the hood release catch in the engine compartment………. a trip to the Dealer or Indy might be in order, unless someone here can add a “How to open” in this circumstance .

Maybe I went a little too far in removal of below items, but here goes anyway as I could not see any other way around it.

1) Disconnect and remove battery and battery tray(make sure you have radio code)
Once the tray is removed, check out the vacuum pipes, I broke some in the area of the tray and it is a pain to get too anyway so you may as well replace now. 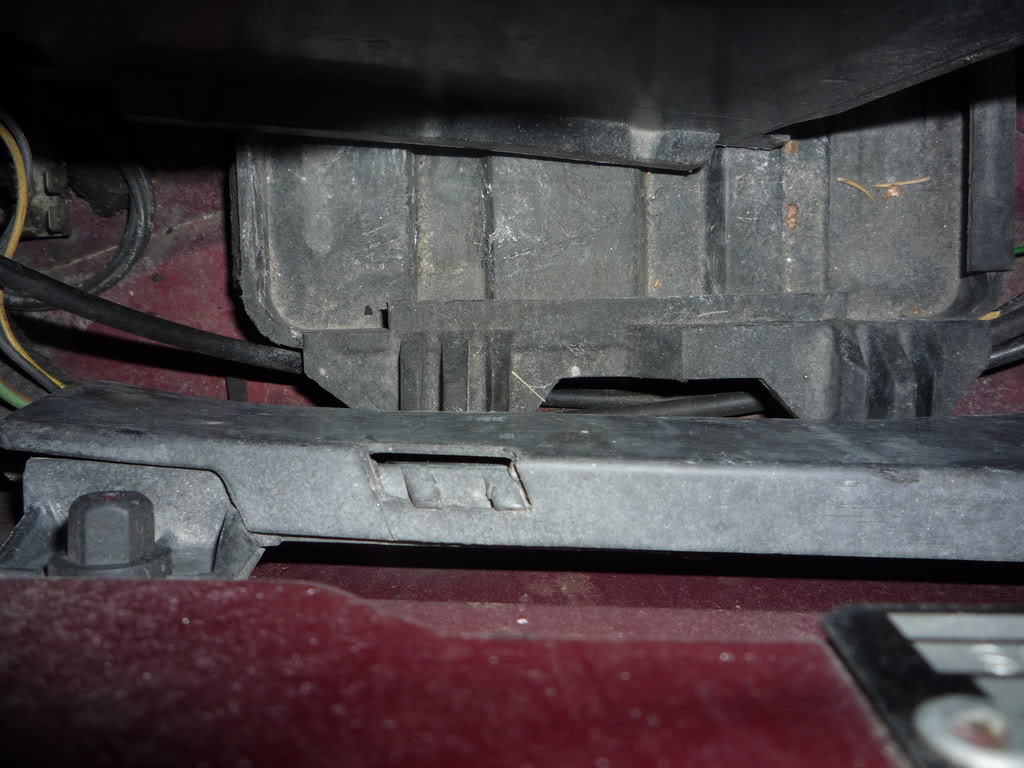 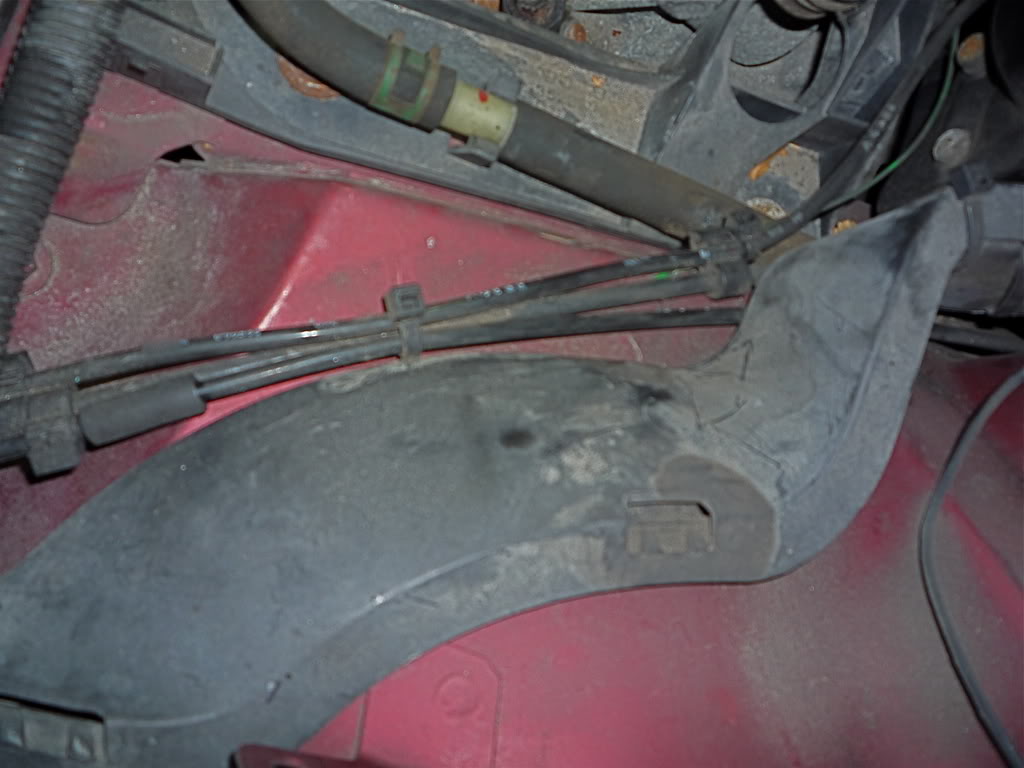 2) Remove air box cover, filter and base, place base of airbox out of the way.

3) Disconnect the cable from the hood latch cable ties and other ties, remove the retaining clip in the cabin from drivers side bracket, white metal attachment point, as the cable has broken here, you can slide the retaining clip off the wire, you will not be able to pull it through the fire wall grommet anyway!

4) Tape, very well, joining end to end, the old cable and new cable before you pull it through the firewall, towards the engine compartment. Now…”mui importante” , this is really when you need help, get someone to feed the cable through the firewall while you gently pull and encourage the progress from the engine compartment.
You do not want to have the cables separate from one another at this stage, it is not a pleasant task to be fishing for the new cable in a very limited space. If it goes “pear shaped” at this stage it is a real “Biatch” to get it through.

5) I took off the left hand hood catch in the engine compartment, to make it easier to insert the cable, height adjustment of the catch may necessary when you re-attach. This is to ensure the hood is level. 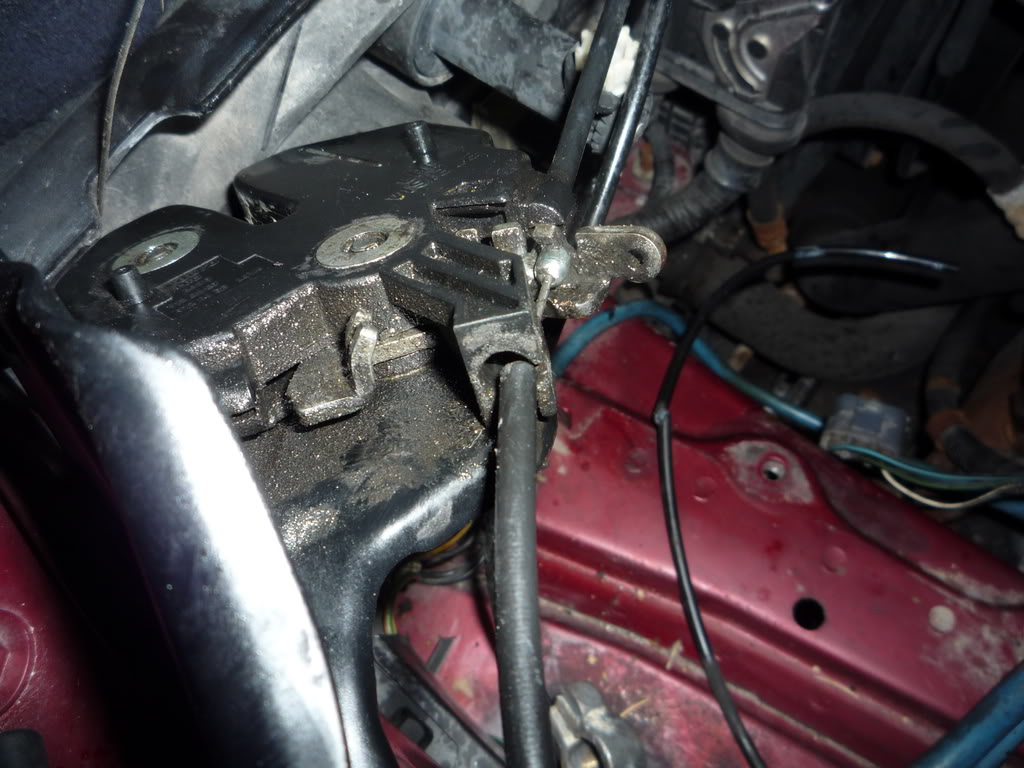 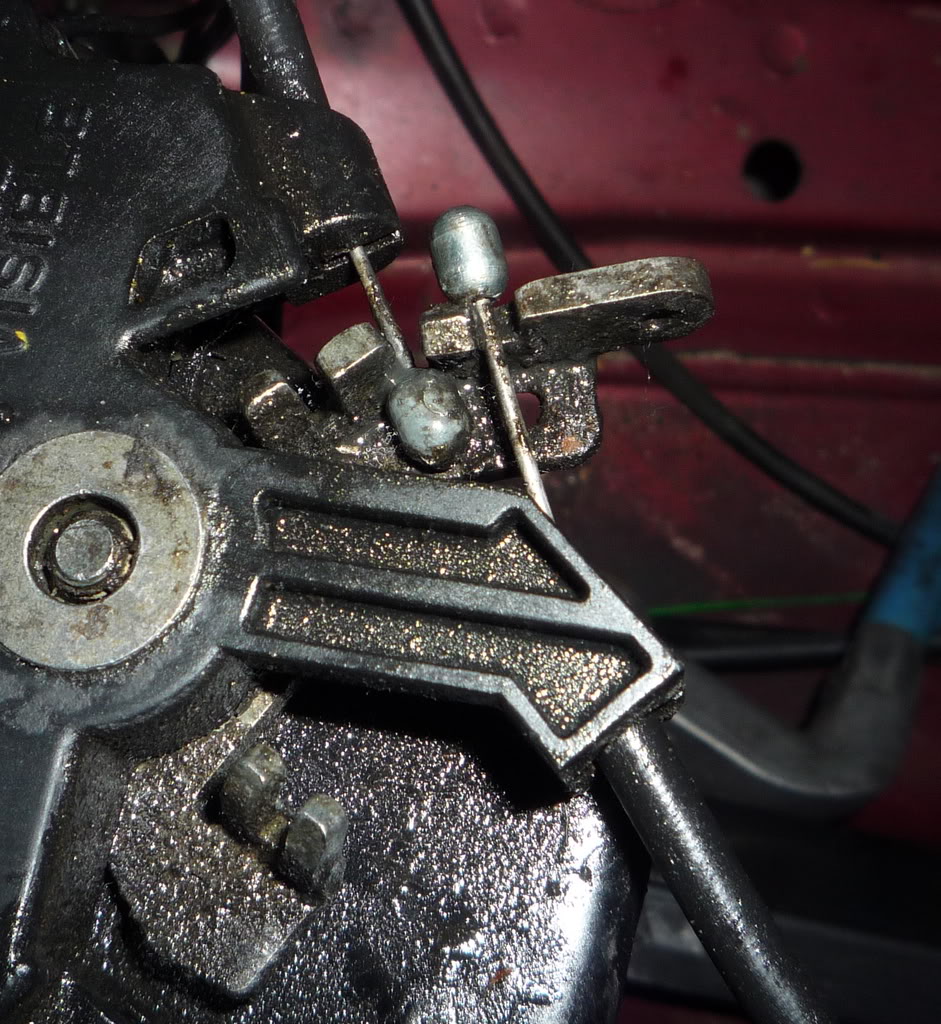 6) You will have to re-adjust the cable which is done at the retaining clip in the cabin to either take up the slack or ease it off.

7) I did not replace the second cable which runs across the front of the car from catch to catch, it may have been a good idea

All back together and adjusted.

Or view the Volvo Forum topics discussing how to adjust each of the hood latches that hold the hood down:

Okay, I just fixed my 1998 AWD hood release with a wire connector crimp. The cable coming from the lever inside the car is stretched so no amount of pulling will release the latch. I cut off the wire insert end of a electrical crimp spade (ends up looking like a tiny barrel). I put it over the cable end by the drivers side latch. I slipped the little tube, with the slit opened up on its side, over the cable just behind where the ball on the end makes contact with the lever arm. Then crushed it over the cable using needle nose pliers. Thus effectively taking up the slack in the cable. It works for me, although I will be looking up the part number for the cable in the meantime.

my 2ooo Volvo s40 1.9t hood release requires 1 person to hold hood release open while other person lifts hood.. Is this a linkage problem, like cable has stretched?

How do i adjust hood latches to lock both sides when the hood is closed.

Drivers side hood latch doesn’t release, after lifting the hood I must go back release the hood with the hood release handle in the car.

on my 98 xc70 it takes 2 people to open the hood one to pull the inside lever the other to lift on the drivers side hood, after you release the bottom latch