Rye Z of RZ Design is our guest on Fast Friday #30. He writes about the nearly-ready-to-sell kit, built around a Mitsubishi TD05H-16G “The TD05H shares these same advantages, but is capable of much higher output because of its size.”

The first version of the prototype kit (above) featured just the basics. Oil and water lines made with the highest quality components I could find, and the necessary gaskets and flanges. Work began on the installation and the kit was tweaked and expanded. Now, as the kit nears completion, it features: 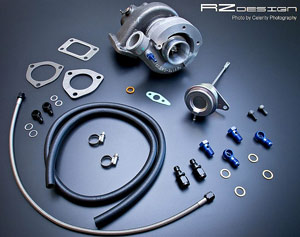