Check out this Cam Adjustment Tool 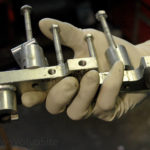 Dave at Volvo Specialists said years ago he toyed with cam timing on his 850 Turbo but found that no adjustment was better than the factory adjustment. At one point, his low end was so bad he could have run faster than his 850 for the first 30 feet. To the right is the Volvo cam timing adjustment tool. It seperates at its center. The two circular outboard cylinders lock into the cams, and from the other side you dial in degrees plus or minus from factory center.