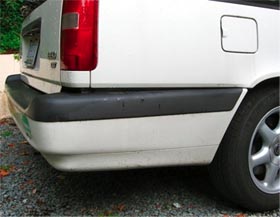 I took the rear bumper off and replaced the brackets, bolts and washers and I took some photos along the way to show what I did in case it might be of use to somebody else faced with a similar project. As others have noted, there was a great deal of corrosion on the passenger side bracket, which explained the large amount of downwards sagging after what was a relatively minor bump.”

Volvo’s 1997 flagship, the 850 R, is an enthusiast’s dream: a high performance road machine with the kind of safety engineering that is synonymous with the Volvo brand name. The model was first introduced in 1995 as the 850 T-5R.

Pricing for 1997 reflects the new 850 GLT engine package and modest fluctuations in world currency. MSRP for the 850 models, sales weighted and reflecting content changes is up 3.1%. The MSRP for the 960 models is up 1.0%. Overall Volvo’s MSRP pricing for 1997 has increased 2.5%.