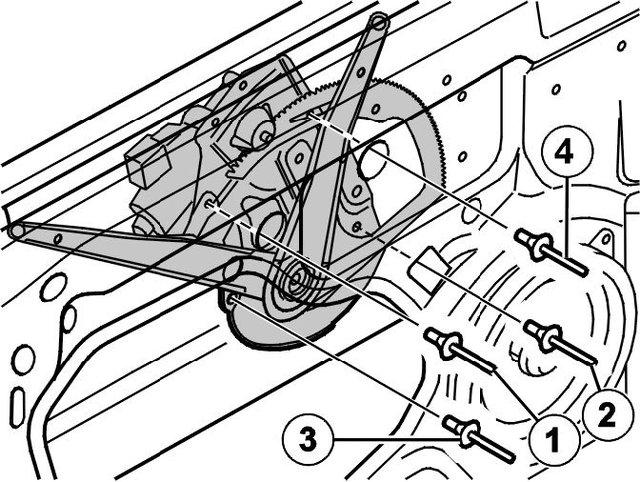 MVS member Al D has a broken window… it won’t roll up or down. In this Volvo Forum post he documents his S80’s window regulator fix, including his methodology on making his window roll up and down smoothly again:

SUBJECT VEHICLE: 2005 Volvo S80 (AND OTHERS) – Regarding replacing the window regulator and/or the blue slider clips.

This is a long explanation. I just spent two weekends struggling with fixing my Left front (Driver in USA – but similar to right passenger front in USA) window regulator. I will say that I am a bit of a gambler and try to do things for the least amount of money. Sometimes this works out well. This time it did.

1) Window was binding up mid-way. This was initially fixed after opening up the door and relocating the wire harness which had become dislodged and was impeding the movement of the regulator and window. I took the other door panel off to understand how to orient the wire harness. Some plastic had broken so I reaffixed it with . . . Duct Tape – the universal fix it.

2) After that was fixed – the window would not budge from the fully closed position unless encouraged by prying it down while hitting the down button. This would not work every time and took some persistence along with replacing the fuse 4 times. I suspected a dead spot in the motor. Ultimately, after the window regulator was removed I determined that the rear regulator arm (which was flat steel) had twisted (maybe from the prying – not sure).

I bought a used regulator and motor off a 2001 S60 (Ebay – USD45) which I was told was compatible. I ultimately discovered that it was.

These are the instructions for removal and replacement of the regulator only.

Elsewhere on this or other forums or youtubes you will find instructions for removal and replacement of the door panel and the two plastic slider clips which are the most common issues with these windows. I will not address these here but will say only that the clips can be replaced by hand or with the help of a screw driver and or plyers if the window is oriented halfway down within the door openings. It is easy to get discouraged because this is a tedious process. You can do it. Took me 30-45 minutes just to reattach the new clips.

OK – now for the PITA process of removal and replacing the regulator.

Assuming that you have unattached the regulator from the blue clips and taped your window to the top of the doorframe to get it out of the way, you are ready to tackle the regulator (find instructions for this on Youtube or this site). There are four rivets holding the regulator to the inner door frame. One of these rivets is directly behind the door handle mechanism which is also affixed with four rivets. You must drill out the four rivets holding the door handle. Start with a smaller drill and work up to the necessary size so as not to over-widen the door holes.

Then drill out the four rivets holding the regulator to the door. See attachment
2010-01-17_013755_reg.jpg
Volvo S80 Window Regulator and Rivets
as to where these rivets are located. There is also a door brace covering the large opening in the door. You will need to drill out the bottom rivet of the brace to re-orient this brace so that the opening is unblocked. You will then be able to remove the original regulator.

The used S60 regulator had a stamped bulged rear arm (not flat steel) that essentially made the arm more stable and inflexible (a good thing). I’m not sure if the one that I removed was original or aftermarket. Suffice it to say – the used one is stronger and I assume more durable. I was concerned after putting it in that the bulge would impede the window movement. It was close but it work flawlessly.

OK – aside from reattaching the blue clips – which as stated earlier is a PITA, installing the regulator was fairly straightforward. However, you need a blind rivet tool that will be able to work through the inner skin holes. I borrowed one from my mechanic (it looks like gardening shears handles with a fairly long head. You can also buy another style rivet tool on EBAY that should work as well – see “RIVET TOOL LAZY TONGS” for about $40 including shipping from UK to USA. I was able to reattach three of the four rivets. The front bottom rivet was too deep beneath the skin for the tool to reach through the square hole you may see in the attached graphic. I could have cut the skin to make more room for the tool to reach but the regulator was very tightly affixed with three rivets so I opted to leave the last one out. Please note that I needed to drill out the holes in the door and the regulator to accept the slightly larger (and stronger) rivets that I had purchased.

Make sure you grease up the blue plastic slider guides and the channel.

Go right to Al D’s Window Regulator Replacement writeup. Or use the link below to go to the beginning of the MVS Volvo Forums topic.

Thanks for your write up – very useful. However I am struggling with the re-assembly.

How did you move the regulator into position and when did you clip the arms onto the window tracks?