The inline 5 (I5) cylinder engine has come to be a symbol of Volvo’s recent past. But did you know that manufacturers started whipping up first iterations of this quirky engine as early as the 1930s?

While in the US we gave up on the 5 cylinder, the story’s a bit different in Europe, where it flourished. Over the last 90 years, the I5’s been used in everything from WW2 military vehicles, sedans, and sports cars, to our modern SUVs and trucks.

Let’s look at the early history of this iconic engine and exactly how – and when – Volvo joined the party.

The Earliest 5 Cylinders: Ford and Lancia

The earliest known 5-cylinder comes from Henry Ford himself (p.64). Ford was famous for near-constant experimenting when he was leader of the Ford Motor Company and many of his ideas, including the 5-cylinder, never left the design table. He experimented with V10s, X-8s (yes, an 8-cylinder engine shaped like an X, with 2 cylinders on each end), opposed cylinder engines, and of course, the 5 cylinder.

The larger designs were meant to compete with the new 6-cylinder engines from competing companies like Chevy, but that wasn’t the vision for the 5 cylinder.

Ford developed the I5 in the late 1930s and early 1940s and, like Volvo some 50 years later, Ford saw the 5 cylinder as an option for a smaller economy car. Indeed, the engine they produced clocked in at just under 2.5 liters and produced a meager 50 to 60 HP.

In the end, Ford simply couldn’t shave enough cost off manufacturing to make a smaller economy car an affordable option and the 5-cylinder was scrapped.

The first production 5 cylinder, on the other hand, came from Italian manufacturer Lancia.

The first production 5 cylinder, on the other hand, came from Italian manufacturer Lancia. In the late 1930s, Italy (and the rest of Europe) were embroiled in WW2 and Lancia was manufacturing a line of transport trucks for the Italian Army.

Mercedes Steps Up to the Plate

In 1974, Mercedes introduced their new 3 liter 5-cylinder diesel (known as the OM617), which first saw action with the 240D and now-famous 300D. While not sporty by any means – accelerating from 0 to 60 in 17 seconds – the OM617 is downright reliable, with many 300Ds clocking in over 500,000 miles. Some enthusiasts have even claimed the OM617 as the most reliable engine ever – period!

However, before the 300D became so famous in the 1980s, Mercedes wasn’t alone with a production 5 cylinder.

We’re all likely aware of Audi’s connection to the 5-cylinder and motorsports, most notably as a rally car in the early ’80s, but also through successes in hill climbing Pikes Peak and other US-based racing.

In 1976, Audi introduced the first gas-powered production 5 cylinder for the Audi 100. With the larger engine, the car was considered a step up from Audi’s previous models, though with the 2.1 liter engine producing 136HP it wasn’t up to racing-status quite yet.

Like Volvo, Audi will always be permanently connected to the 5 cylinder, thanks to their huge showing in motorsports

Fast forward to 1980 and Audi has introduced the Quattro, featuring a turbocharged 5 cylinder engine and permanent 4-wheel drive. Clocking in at 200HP, Audi soon entered the Quattro in rally races. Throughout the early ’80s, Like Volvo, Audi will always be permanently connected to the 5 cylinder, thanks to their huge showing in motorsports, especially Group B rallying in the early 1980s. Throughout the 80s, Audi continually updated the Quattro and eventually took home 23 world championships.

While Volvo only introduced its first 5 cylinder, the Volvo 850, in 1991 – much later than Audi – the actual development of the 5 cylinder started way back in 1978, just two years after their rival introduced the 5 cylinder Audi 100.

In the late ’70s, Volvo wanted to jumpstart their move towards a more modern automobile. They created a new special project dubbed the Galaxy Project, as they were – in their own words – ‘aiming for the stars’ by creating something completely new. Indeed, the project encompassed new ideas everywhere: new body styles, new materials, new safety components and, of course, new engines. It was a long-term investment, with an economic, future-forward car as the ultimate goal.

Over the next 10 years or so, Volvo poured huge amounts of money into Project Galaxy and it eventually ended up becoming the most expensive project Volvo had ever taken on at the time. However, their push into the future eventually birthed two new cars, the Volvo 480 and the 850, the latter of which would go on to define Volvo for a decade or more.

Project Galaxy eventually ended up becoming the most expensive project Volvo had ever taken on at the time. However, their push into the future eventually birthed two new cars, the Volvo 480 and the 850, the latter of which would go on to define Volvo for a decade or more.

The 480 was built in Volvo’s Dutch manufacturing plant from 1986 to 1995. It was the first front-wheel drive vehicle Volvo had ever produced – one of the major goals of Project Galaxy – but the differences didn’t stop there. The 3-door hatchback was a stark right turn to Volvo’s traditional vehicles, with the FWD, low ground clearance, and sleek design (pop up headlights!) aimed at a younger audience. The 480 also enjoyed design elements that we’d later see in the Volvo C30 – most notably the full-glass back hatch.

Unlike the 480, Volvo built the 850 in Sweden. Introduced in 1991, a full 13 years after Project Galaxy first started, the 850 sported many of the ideas Volvo envisioned for the project. First off, the drivetrain was completely front-wheel drive with the engine transversely mounted in the engine bay, a major change for Volvo, but necessary to keep up with other manufacturers that had already switched over.

To keep everything as light as possible, the entire engine block was composed of aluminum, as opposed to heavier cast iron. The 850 also included Volvo’s new SIPS (Side Impact Protection System).

And of course, the 850 also included Volvo’s very first 5 cylinder engine. Why did they choose a 5-cylinder instead of a 4 or even 6?

First off, we can only imagine that, with Audi seeing huge successes with their own I5, Volvo – as well as other manufacturers – were already somewhat open to the idea of a new 5 cylinder engine.

From the very beginning, one of Project Galaxy’s goals was the Modular Engine – an engine design that could easily be converted to a 4, 5, or 6 cylinder with little extra design and production changes, allowing Volvo to produce a variety of engines for less time and money.

During the early years of Project Galaxy, the development group initially developed their transverse engine as a 4 cylinder, with 5 and 6 cylinder models as secondary options. When it came time to test the engines though, Volvo’s engineers loved the 5 cylinder’s performance so much they decided to focus in on this oddball engine, with the 4 and 6 cylinders eventually falling to the wayside.

After the 850 proved such a huge success, thanks to their raucous showing in motorsports and the public’s fascination with the boxy underdog, Volvo kept introducing the 5 cylinder in more and more models, with the engine becoming increasingly intertwined with Volvo’s image over the next decade.

After the 850 in 1991, Volvo introduced 3 more models featuring the 5 cylinder engine:

Over the next decade, the 5 cylinder became increasingly prevalent, with Volvo throwing the inline 5 in pretty much every car they manufactured:

As engine technology continued to rapidly progress, manufacturers were able to coax major power out of smaller engines, with little effect on efficiency. The popularity of 5 cylinders began to wane and even Volvo moved on to smaller, more efficient inline 4s. Since 2010, Volvo has introduced the 5 cylinder briefly to a couple models, but nothing long-lasting:

The Future Is Small

The inline 5’s pleasing sound and better NVH (Noise, Vibration, Harshness) generally leads to a more pleasant experience than an I4 engine. Audi continues to use a turbocharged 5 cylinder engine in the 2018 Audi TT, but we can’t say the same for Volvo. The last two cars they’ve introduced, 2016’s S90 sedan and 2017’s XC40 SUV, wowed critics but both only feature a 4 cylinder engine.

In fact, as far back as 2009 Volvo announced they were ditching all engines bigger than 4 cylinders, including the I5 that they – and we – are so fond of. When Ford sold Volvo to Chinese automaker Geely the following year, Volvo took the time to rethink their designs and customer needs and decided that both they, and their customers, would benefit from smaller, more efficient turbocharged engines, like the current widespread trend in the automotive world. The 5 cylinder was toast.

Volvo took the time to rethink their designs and customer needs and decided that both they, and their customers, would better benefit from smaller, more efficient turbocharged engines. The 5 cylinder was toast.

If you’re now pouring out lamentations for Volvo’s 5 cylinder, consider this: the 2017 XC90’s dainty (albeit twin-charged) 4 cylinder engine produces a whopping 316 HP and 295 ft-lbs of torque. That’s a lot more power and better fuel consumption than the V70R.

When Volvo first introduced the 5 cylinder engine way back in 1991, it filled an important niche. It was a midway point, providing greater power than a 4 cylinder, but greater efficiency than an I6 or V8. However, times change. Volvo is moving into the future, and the 5 cylinder engine simply isn’t a part of that future. 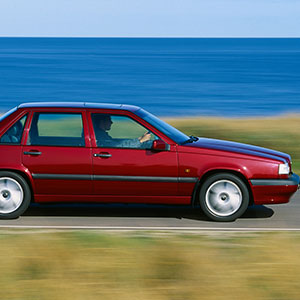 Article Name
History of the Volvo 5 Cylinder: Part 2
Description
The 5 cylinder engine is a symbol of Volvo's past, but car makers started their iterations of this historically significant engine as early as the 1930s.
Ryan
Publisher Name
MatthewsVolvoSite
Publisher Logo