Performance Exhaust: an Open Letter from the “Touring Class”

I’ve quickly come to love my new-to-me 2012 C70 T5, and of course I’m already considering all kinds of extras that I’ll have to save up for and prioritize. One of the first things I looked at was performance exhausts. Two emerged as likely contenders: Elevate’s 3″ turboback (Elevate link for P2 V70), and Mototec’s 2.5″ touring catback exhaust. Putting a 3″ downpipe on a 2.5″ catback makes no sense to me.

However, I had to rule them both out.

Mototec’s system only comes with round tips, and the C70 comes with oval. The cutouts in the bumper are shaped for ovals. 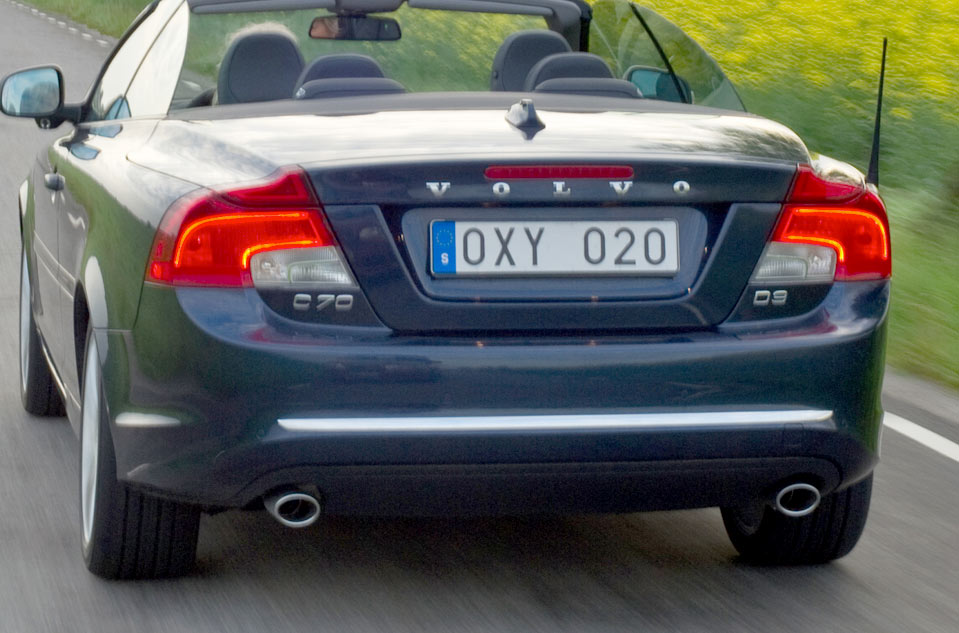 A round tip is going to glaringly look like it doesn’t belong there. It’s stylistically unacceptable on our nice sleek swede sleds. It also means it’s really meant for the C30, and it’s listed as an also-fits. That’s bad mojo in my book.

Elevate’s 3″ system looks like a perfect match for an upgraded turbo on a performance-first car. That isn’t me, and it isn’t what I want. I only was able to find a YouTube video of Elevate’s catback; all the turboback results were idiots running 3rd party catless downpipes. Besides, videos lie, you just can’t trust sound coming through someone’s cellphone video recorder. The system sounds sweet, but I couldn’t help the feeling that, at 3″, it was more loud than I wanted on my daily driver and road trip car, and again, bolting a 3″ catback to a factory downpipe makes no sense.

I’m going to go out on a limb and guess that there’s a lot of Volvo pilots like me, who want something in between. With “Touring” characteristics: comfortable for long interstate drives while chatting with the passengers, not having to yell over that damned hum that’s louder than road noise in certain speed ranges, looking and sounding like it belongs there, but with a satisfying growl when I stick my toes out through the grille.

In fact, I’ll go even further out on a limb: I think there are more Touring types like me, than there are hardcore power chasers, among Volvo enthusiasts. Well, except maybe the C30 and R crowds. That would make us a grossly underrepresented market, just waiting for a well engineered solution that meets our needs and wants.

Noisemaking and maximum power are not the goals. The goal is a modest improvement in performance, efficiency, and aesthetics, both visual and audible, while being of optimal design for the particular turbo, and of superior longevity.

We can make some further assumptions about Touring Class upgraders:

I’ll be blunt, I’d like to see Elevate design and market this exhaust, with matching Touring-optimized maps for their tuning product. I like the way they think. But, in the end, I’m not picky. I just want to see a solution that meets my market segment’s needs, and right now, there isn’t one.

Go full custom, you say? Problem with that is, choosing the right components is the job of an engineer, not the job of a welder. A custom solution is going to be hit-or-miss, trial-and-error, going through parts until a satisfactory combination is found. That’s more expensive than paying an engineer.

So, is there an engineer out there who’d pick up this spec and run with it?

MVS Contributor kcodyjr wrote it and sent it yesterday. It outlines his frustrations with the design decisions aftermarket exhaust manufacturers and suppliers have made. Links, headers and bolds are MVS’s, not Kevins.

Hey Y’all…yes I said ‘Y’all’. I have recently purchased a 1997 v70 Wagon and I have a few issues with her. My Power steering is sporatic and my Front Passenger Electric window is…well, Duct Taped Closed. This is my First Volvo Ever but man I LOVE THIS CAR, she is Quality…except for the few things wrong with her. I should mention that I Live in Norway…the Country….right next to Sweden…the Country, where Volvo’s are made. Has anyone else had these problems with this year and model? And I would Love to get connected to a Volvo Club in my direct vacinity…. in Norway….TheCountry. I live in Lillestrom. Thanks.