Check out these Vacuum Lines 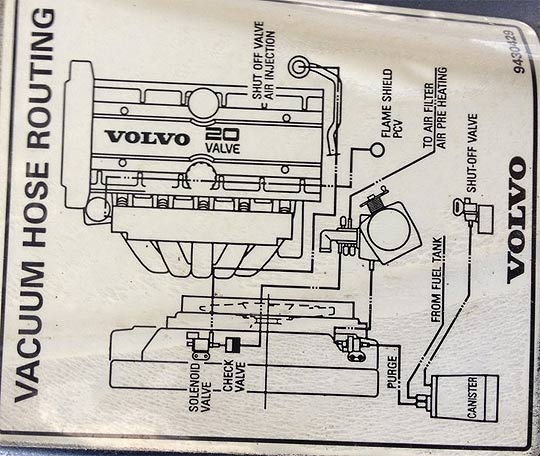 As a companion to a similar thread for turbo cars [vacuum line diagrams for turbo Volvo 850 and Gen. 1 S70/V70/C70/XC70], here is a thread dedicated to documenting the vacuum lines in the non-turbo (NA) 850 and 98 S/V/C70. I know that what I am posting here is good for 95+ without EGR, someone else will have to help out with 93 and 94 differences and/or for EGR.

1. The seatbelt was invented by Volvo, about 50 years ago, which the company deliberately did not patent. The company felt that the safety that it would provide to all car owners across the world more than makes up for it.
2. The company was officially founded on 14 April 1927. The first Volvo car was called the “Jakob” and was manufactured in 1927.
3. The Volvo 200 series was released in 1974 and the 6-cylinder version followed soon after.
4. In Latin, Volvo means “I roll” and the name was originally registered for a ball bearing company in the year 1911. This was meant to be a separate company that SKF had created. This plan was scrapped and the name was used for the car manufacturing unit and what an apt one it was!
5. In 1999, Volvo was added along with Aston Martin and Jaguar to the Ford Prestige Auto Group. The company was sold in 2010 to the Zhejiang Geely Holding Group which was a Chinese company.
6. The first production car to have a laminated windscreen was the Volvo PV444.
7. In the first half of the 1980’s most of the chrome finish on the 240 series was painted black to lend it a sportier look. Some averred that it looked very down market.
8. All the luxurious Volvo models were outfitted with the V6 engine that was also popularly called the PRV engine after Peugeot, Renault and Volvo – these three companies collectively designed the engine.
9. The Volvo truck assembly started in 1974 in Ghent.
10. The first Volvo truck model that was produced was the Volvo Amazon.