The photos are nestled in the What Did You Do To Your Volvo Today? topic and show BlackBart’s job of installing his 850 wagon’s fuel tank. Read about his fuel tank fix. He had it out to fix a longtime problem on 850 cars and the subject of a recall: MVS Contributor BlackBart » I […]

MVS Contributor j-dawg: I need to load a ton of junk into my car soon, and I couldn’t find any info on the intertubes, so I measured its cargo area dimensions and put them in this picture. My car has basically no rear cargo options, eg: grocery nets, cargo bay cover, dog cage, third row […]

Rear wipers for wagon models. Gets stored between those upright tabs just in front of it in photo. Higher rez photo in the forum topic: 96 Volvo 850R unknown connector

I replaced the rear shock absorbers and mounts on my ’97 850 wagon GLT at ~147K miles yesterday. I was replacing the shocks because they were good and worn out, with sagging rear suspension height (~ 1-2cm of sag), visible leaking oil on the outside of the shock tubes, and rubbing of one of the […] 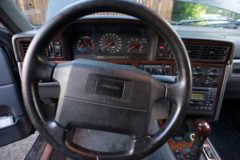 Volvo’s 850, first introduced in 1992, is almost legendary for its list of firsts and set the stage for many of Volvo’s subsequent vehicles. The 850 was the company’s first foray into front-wheel drive (in the US) and all-wheel drive in a later update. The 850 also introduced side impact airbags to the world. On […]

Thanks Luketrash for your write-up on going to the salvage yard to get a fuel pump out of a 850 wagon. This would apply to wagons up through ’00 as well.

How-to: adjust your volvo trunk latch.   If your trunk fails to latch when you close it, it could be the receiver. Mine got pushed down somehow, causing a temporarily inexplicably-non-latching trunk when I got my 850 back from u-Haul. (I had them install a trailer hitch.) Hmm. After some investigation, I adjusted the receiver […]