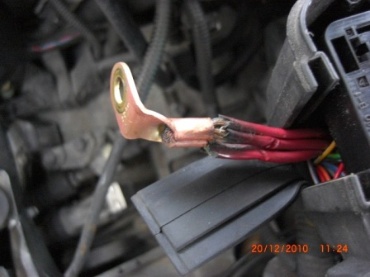 Headlights intensity lower when rear defroster is used or when ABS activates. Lights are dimming in dash pod when electrical system is stressed. ECC unit lights flashes after car is started in freezing condition. Starter motor turns normally and alternator is charging well.

B+ terminal has become resistive under main fuse box.

There is a voltage drop of .5 volt or more between the battery B+ terminal and main fuse box. This is measured under load, blower fan to maximum, rear defroster on, heated seats on with engine idling.