Looking to buy a Volvo S70? 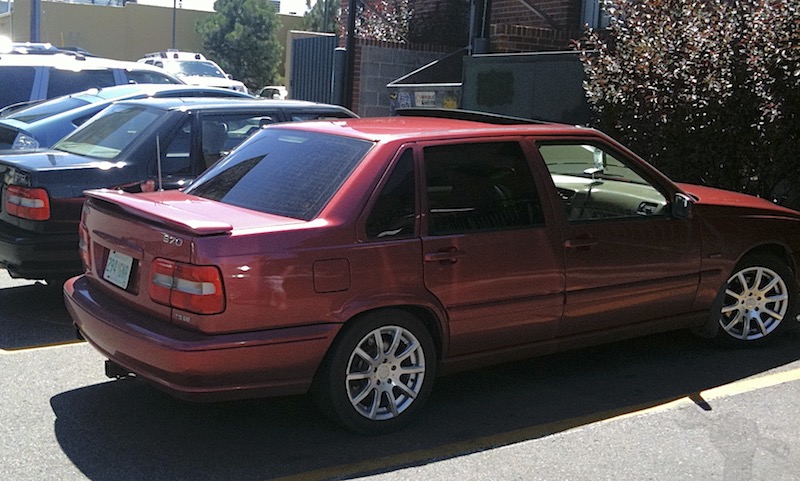 Actually my Volvo story begins in 1995 with an 84 240; not a long history in comparison to some others for sure. But that’s another story.

This chapter in my Volvo saga begins with motorcycles. Yeah motorcycles. I road-race out here in the midwest in the TrackAddix Great Plains Series and we had our awards banquet at a hotel in KC this past Jan. I was terribly sick with a nasty flu and it made for a lousy time – but there in the hotel parking lot I saw it, a red S60R. It wasn’t even clean but it was uber-cool.

Damn I thought: That’s a Volvo? I hadn’t been paying too much attention to cars in recent years, suffering more from a two-wheel syndrome of late. Plus I was now living in Manhattan, KS and it isn’t a place crowded with foreign cars; the myriad European cars I had grown so accustomed to on the east coast were utterly lacking and thus my surprise to see this kick ass Whall-woe.

The last Volvo I had had was sold two years prior and that 240 Diesel was well used; has any one else gotten excited for a snowy day and headed to the parking lots to do doughnuts and drift about (in a diesel with 81 hp motivating some 2900 pounds no less) until they were dizzy. I miss rear wheel drive Anyway – I had to learn about this S60 – I’d been outta the Volvo loop for a while – really hadn’t paid to close attention in those years to the Volvo’s as they were (and still are) outta my range when new. Though I have always fondly recalled the ad campaign when the 850 R’s first came out, it showed an Italian exotic (Lamborghini I think) with a trailer attached and words to the effect: You get the idea or something like that. (Just searched 30 some pages of Google images to no avail somebody out there got it?) I knew about IPD and I had a parts list I dreamed of filling… but again that’s another story.

So as I made my way across the garage the red S60R with Alabama plates had my attention. When I returned back to Manhattan I looked it up on the internet and in short time was perusing the forums. The S60R was mostly outta reach, I am not looking for a big car payment right now, motorcycle racing consumes it’s own budget quite well thank you but I knew it was time to get back into a Volvo; I tracked the 900 series and 850’s on ebay (I’d even made a spreadsheet to gauge: price, miles, years, location, etc.) Now the 850 and 900 are two dramatically different cars, I know, but they both have their unique appeal. I cruised the forums in search of a deal… Volvospeed, Turbobricks, this site, Swedespeed, V70R. I lurked for weeks and slowly learned a cast of characters, some with renowned acerbity, yet combined with a real no-nonsense knowledge – if you got past the pithiness and questioning. Others more outgoing and just as knowledgeable, some with inane comments that seemed merely there to be counted…. yet we all love the Volvo and want to share in that joy. I was learning a lot and lusting after some nice rides.

Then I stumbled upon it in the classifieds of Swedespeed, a short almost half-hearted sales pitch for an S70…. it didn’t seem like the buyer was enthusiastic, but it was listed:

needs work but nothing a knowledgeable Swedespeeder couldn’t handle (I am not one of those)
$1500…I am buying another vehiclle and won’t get much trade-in.

No pictures. But $1500 for a T-5 and with the work it needed that seemed like a good deal (none of it seemed beyond my capabilities) but it was 1200 miles away. Turns out though that 1200 mile seperation put it right near where I grew up and where my parents still live. I motivated my dad into scoping it out – if I arranged the meeting. He was game. The buyer wasn’t in a hurry to sell, but I wasn’t in a hurry either . I would happen to be in DC for a family event but not for another month, it all worked out great. After some near 30 e-mails back and forth and all around, my dad got to check it out, I received pictures and a first hand description on the mobile. I said: Get it. A couple e-mails later and a deal was made. I joined the forums, a lurker no more.

Then the research and queries began in earnest, I have learned a lot, a whole lot. I now know why you need to have a good PCV system’ – to keep the RMS in check (and that FCP’s diagram is backwards) and look out for the CEL, the ABS module, a modified tranny flush anyone, Stage 1 upgrade, not before you zero it out, and the t-belt – is it tensioned hydraulically (OK) or mechanically (better) but it depends on when it was built, has the maintenance schedule been followed, especially on that timing belt or you’ll learn the liabilities of an interference head the wrong way, AC compressor replaced (inevitable failure I read), does the rack leak, PNP switch, SAS failure And this is a car I am excited to buy? With the model having these known issues?? Yeah it is; you betcha. I’ve got lots more to go, no doubt and I am ready for it ( I think so!). Fortunately plenty have been there, done it, photographed it and explained it well. And are willing and eager to share it with you.

A moment to acknowledge and thank them.

Well I begin my journey in a couple hours – I hope to have an update after I have picked it up, some 1200 miles from here, later today

I just did basically the same thing except my trip was only half as long as yours. I picked up a 97′ turbo GLT for $1800 with 120k and it needs a few things but man was the price right! I have a 93′ GLT non turbo with 212k that I love, but I’m a little partial to the turbo now! Nice work on the road fixes =)!

Fantastic! Keep this blog updated. It’s an exciting journey for sure. I wouldn’t trade it for the world!