Check out this Anti-Skid Fix 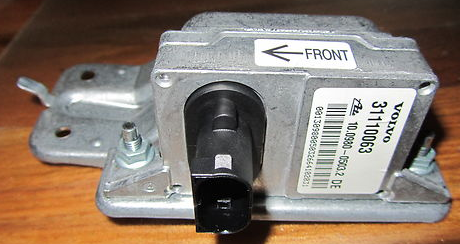 MVS Volvo Forums member (now Contributor) ALF1 drops the knowhow for a fix that’ll save you about $300, or much more if you’re going to purchase a new yaw sensor.

Folks – The Active Yaw Control Sensor (found under the passenger seat and carpet) is a very expensive repair whether you purchase a new unit or send yours off to be re-manufactured by Xemodex or BBA Reman or try to get a used one.

Fortunately, I found that BCM (brake control module) codes indicating a failed Yaw Sensor may not necessarily indicate a $500+ repair is on the horizon. In my case, water had not penetrated the Yaw Sensor housing. Rather, water had pooled in the cowling of the plastic electrical fitting that passed through the Yaw Sensor housing. This fitting contains the connection pins to which the harness is attached. Removal inspection showed green corrosion deposits on and in-between the pins. I assume that this somehow shorted the pins and lead to the Yaw Sensor failure codes.

I was able to carefully dry and clean the pins and female wire connector, re-install (without the water…more on this later). Clearing and rereading the codes at my Independent shop revealed DTC ABS/BCM [ABS-0012 / Active Yaw Control Sensor, sensor not calibrated] or using VIDA the code becomes [BCM-0112 AYC-Sensors not calibrated]. For under $100, you can have a shop with VIDA recalibrate the Active Yaw Control Sensor…actually its called Reprogram Anti Skid Function. That’s the short version for those who have researched the blogs as I do. More detail follows for those who do not.