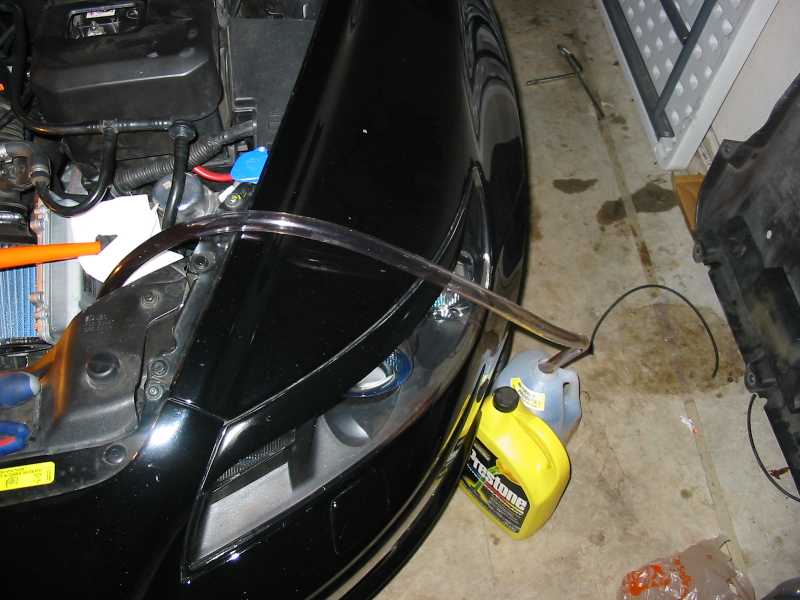 In this post we discuss a modified transmission flush method for your volvo.

You may not know it, But if you drain the automatic transmission fluid by removing the drain plug in the transmission pan, you are only draining about half of the capacity. Three to four quarts of the old fluid remains in the torque converter and as soon as you start the car, your fresh fluid is instantly contaminated. Some models require that you remove the transmission oil pan for draining as they have no drain plug, this is a real pain as the dipstick tube connection can break in the process. Read on to see how MVS forum member MadeInJapan breaks down his formula for a new modified transmission flush method.

Important- Please Read This First (Info for P2 Cars):
I need to add this information at the very beginning of this write up so that there’s no confusion. What is outlined below is for all AWD/FWD Volvo’s up until the design was changed for P2 cars (’01 and later), but this flush method is really the same. What is different is that the newer (P2- or ’01 on) Volvo’s transmission fluid flows in the opposite direction. In other words, when you take the tanny-to-radiator line off, you actually let the tranny flush out of the upper hose connection on the radiator with the newer Volvo’s unlike what is written below (therefore you’ll have to get clear tubing that has an outside diameter of 3/4 inch that goes INTO the ATF cooler on the radiator, unlike what is said below of a 1/2 inch inside diameter hose for pre ’01 70 series and 850’s), which shows the hose still connected to the trannyhose itself (earlier than ’01 Volvo’s). If you have a newer Volvo and don’t do this, you’ll make a mess as fluid will come flowing out of the top of the radiator. Several people on other boards have experienced this and were quite surprised (especially since IPD’s instructions were wrong too). Volvo actually recommends for the P2’s to take the hose off at the tranny, plug the tranny hole with a plastic stopper, and drain from the hose still attached to the radiator (which makes sense but the tranny hole is a biatch to reach). To disconnect the upper hose on the P2 cars, grab the green clamps on each side of the black hose, push in and then pull out. To reinsert, just pinch the clamps again and push the hose in as far as it will go and then release the tabs. For good measure, pull on the hose without pushing in the tabs to make sure it’s secure. It’s actually much easier on these later cars than on the older ones. You can get a case of the Mobil-3309 ATF fluid (JWS-3309 fluid must be used on Aisin Warner 5 speed automatic transmissions and not Dexron III) here at a great savings.

Excellent flush method, and is very easy, but repetitive. I have two 95 850’s, one turbo and one GLT with 209 and 212 kmi respectively. I did this first on the GLT, and it was so easy I decided to do it on the Turbo the same day. I wound up flushing 20 quarts through each car. The fluid in the GLT was much cleaner than in the turbo. Once complete, both cars felt like “new”, but after a few days the GLT has began to act up a bit. The transmission does not always shift quite right, sometimes a bit high and sometimes a little low. I’ve checked the fluid level using the flush method in my owners manual and it is perfect. I purchased both of these around the 200k mark but know the history. This is not the first flush, and the GLT was routinely serviced by a volvo dealer, whereas the Turbo used to go the route of the “jiffy lubes” of the world. I took some – probably poor advice and used regular valvoline dextron III rather than a synthetic, simply because there was not enough available at the store to do the flush (they had 6qts at the store). I’m wondering if now I should do the flush again with the synthetic. Does anyone know if this might help? If so, how many quarts do you think I should use to flush all of the non-synthetic out of the system? (remember the fluid is brand new)

I know that with motor oils they always say once you use synthetic never go back to regular oil. I’m wondering if the same is true for transmission fluid and perhaps the servicing volvo dealer was using synthetic.

off topic, I’ve been using regular oil in the Turbo, I now see from this site that thats a big no-no! I’ll go to synthetic immediately, but should I do the same with the GLT?

Thanks so much for your help!